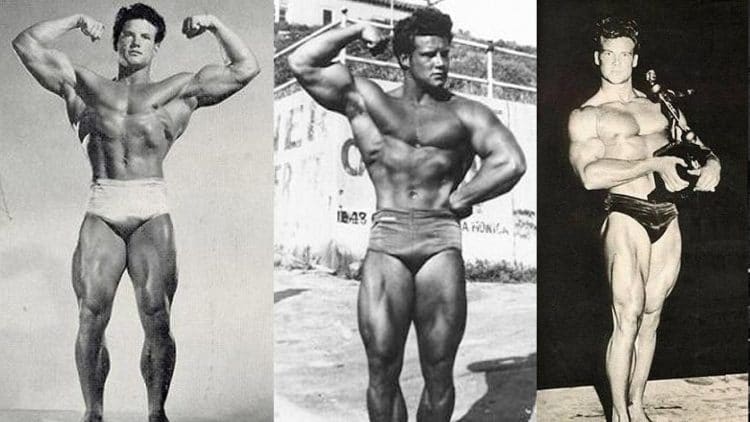 To many Steve Reeves is considered the pinnacle of the male physique. Without the aid of anabolic steroids Steve relied on determination and hard work. He forged a solid 215 pounds of muscle on a 6’1″ frame.

Winning every major title of his era he retired from competitive bodybuilding at the age of just 24. Steve went on to became a famous movie star and ambassador of bodybuilding. His life was as amazing as his physique.

Stephen Lester Reeves was born January 21st, 1926 in Glasgow, Montana. His father died from a farming accident while Steve was just a baby. Steve’s early years were spent moving from place to place as his mother tried to find work. 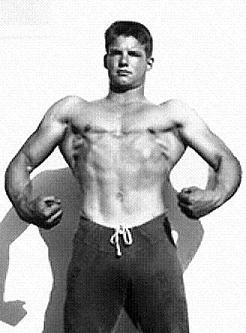 He and his mother eventually settled in Oakland, California when he was ten. This move would place Steve at the right place at the right time.

At one point Steve was shocked after being beaten at arm wrestling by a smaller kid from school. He later found out the kid’s secret….weight lifting! He found the boy, Joe Gambino, working out in a home made gym in his garage.

Steve also saw his first bodybuilding magazine, Strength and Health with John Grimek on the cover. He’d never seen a bodybuilder before but sure wanted to look like Grimek did. John Grimek sported muscular legs, broad shoulders, bulging biceps, and a thick chest. It was at that point that Steve Reeves knew he wanted to become a bodybuilder.

Steve worked out with the other boy for a short time and then began putting together his own gym. He filled his Stepfather’s one car garage with weights and make shift equipment and began his quest for muscles.

He responded quickly to weight training. Soon the little garage wasn’t enough for an up and coming bodybuilder. It was time for Steve Reeves to join a real gym!

His move to Oakland was a lucky thing for Steve since it happened to be the Mecca of bodybuilding in those days. He joined Ed Yarick’s gym on the east side of Oakland. It was a real bodybuilding gym with all the equipment a Mr. America would ever need. 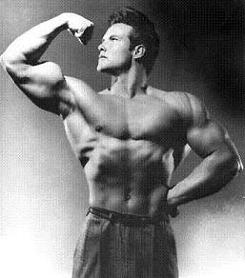 Yarick was a bodybuilder himself and took Steve under his wing. Ed became the father figure Reeves never had and a life long friend. He put Steve on whole body routines three days per week.

Steve entered Yarick’s gym at 6′ 163lbs. After four months of the full body workouts he was 193lbs! His genetics for bodybuilding were incredible. Most men would be happy to gain that kind of size in four years if they could at all.

His mother helped fuel Steve’s workouts with her good knowledge of nutrition. He believed that healthy eating contributed to his success in bodybuilding. Reeves ate lots of fruits and vegetables along with lean meats. Nothing complex just a good balance of healthy foods.

After another year of bodybuilding Steve reached 203lbs and was beginning to make an impression on the local bodybuilding community.

In 1944 after graduating from High School he decided to enter the U.S. military. In the middle of World War 2 at the time, Steve went through basic training and headed off to the front against Japanese forces. He did manage to acquire a 100lb York barbell set and continued training as much as he could.

Reeves caught malaria and remained ill for some time. Losing 25lbs and the incentive to train, his body suffered till wars’ end. During the occupation of Japan he was able to acquire more weights and began building himself up again. He gained twenty pounds of muscle relatively quickly. He left the Army at nearly the same weight in which he entered. 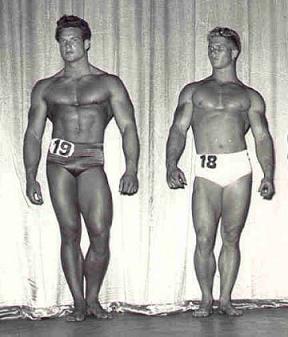 Once back home in California Steve returned to Ed Yarick’s gym and hit the weights hard. He brought his body weight up to 215lbs for the first time and set his sights on the 1946 Mr. Pacific Coast contest.

Steve and a friend traveled to Oregon by train to compete in the contest. In his first bodybuilding competition Steve easily won the show. It wasn’t even close.

Now a title winner Steve Reeves started to become known outside of Oakland. He now thought about the big one, the Mr. America contest. In the mean time he entered and won the 1947 Mr. Pacific Coast contest defending his title. Steve not only took first place, but also won trophies for Best Chest, Best Arms, and Best Legs! One look at any of Steve Reeves photos of the event will tell you he had deserved every single award.

For the 1947 Mr. America Steve flew to Chicago, IL and competed against the best bodybuilders of the day. The America was the biggest title in bodybuilding. He came out on top after initially tying with Eric Pedersen whom he had beaten earlier in the Mr. Pacific Coast contest. 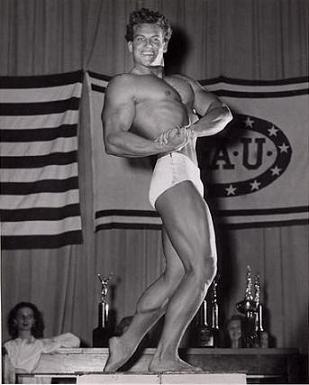 With each of them tied at 72 points a pose off decided 1st place. Pedersen came out first and wowed the crowd. Then Steve took the stage and it was clear that it wasn’t Pedersen’s day. Bronzed to perfection, at the peak of development, and with a graceful posing routine Steve took top honors.

Steve Reeves’ measurements that day were:

Steve Reeves had risen to the top of the bodybuilding world having won the 1947 Mr. America title. Not sure of his future Reeves began acting classes in New York. He also worked out at Sig Klein’s gym and made guest posing appearances as the newly crowned Mr. America. 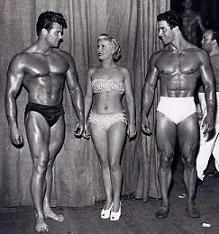 In 1948 Reeves made a last minute decision to enter the Mr. USA contest. Steve had been lured by the $1000.00 top prize but did not allow time to prepare properly.

Rushing a tan, he burned himself badly which affected his appearance and posing ability. A polished and prepared former Mr. America Clancy Ross won the contest.

Reeves had been delivered his first defeat and knew he deserved it. Ross was the better man that day.

The USA, the World, and the Universe

The 1948 Mr. USA was the first in a series of ups and downs for Steve. For the man with probably the best genetics in bodybuilding history he didn’t have an easy time of it.

He entered the new NABBA Mr. Universe contest in London but took second to legendary John Grimek. Although huge and muscular, John didn’t have the aesthetic looking body Steve possessed. The judging seemed influenced by Grimek’s gymnastic ability rather than only his physique.

After the loss, but still in top shape, Reeves flew to France to compete in the Mr. World contest.

It’s hard to imagine someone beating Steve sporting this physique! However, in 1949 Steve once again was defeated by John Grimek. Steve not only lost to John but actually took third behind Clancy Ross.

Grimek was booed and many thought he had received a gift winning first place. Bob Hoffman, Grimek’s good friend, was a big figure behind the scenes and that might have influenced the win. This may have been the most controversial bodybuilding event until the much heated 1980 Mr. Olympia 3 decades later.

Reeves took time off from competition after the USA and focused on his career outside of bodybuilding.

In 1950 Steve Reeves decided to make another run at the NABBA Mr. Universe title. It had now overshadowed the Mr. America as the biggest title in bodybuilding and Steve wanted it bad. After his recent losses he felt he owed it to himself to once again be on top.

He trained for this competition at the famous York Barbell Club in York, PA with his good friend George Eiferman. Reeves had lost a great deal of his previous muscle and few thought he could get into shape by contest time.

In a few weeks, however, Reeves genetics and muscle memory combined to add slabs of muscle to his frame. Reeves was also motivated by the fact that the new British sensation Reg Park would be competing in the contest. (Park would later follow Reeves starring as Hercules in his own series of films.)

Reeves flew once again to London confident in victory. The British crowd had their favorite in massive Reg Park. It was a tremendous battle for sure.

Once again, as with the 1947 Mr. America, the contest was a tie for first place. It came down to just Steve and Reg Park. The two were called out for final pose downs. Both men were in top shape and it could have gone either way without much complaint.

At the end of the day Steve once again captured the top prize in bodybuilding. Announced the 1950 Mr. Universe, Steve Reeves was presented a very special trophy. A bronze statue of Eugene Sandow.

After the contest Steve announced he was retiring from bodybuilding competition to pursue other interests. 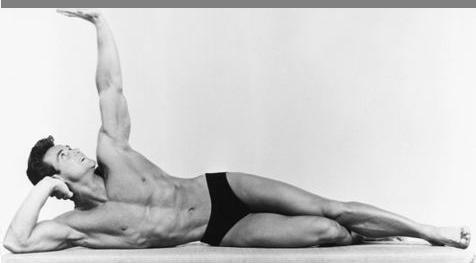 With no real money in the sport those days he had to think of his future. Acting seemed to be his focus now. No one could have imagined how Steve’s physique would impact the movie business.

At 24 years old Steve Reeves future was bright indeed. Forever immortalized as an Iron Age bodybuilding champion he would soon become famous the world around as the mythical Hercules!

The Best Male Bodybuilder of The Gold Area?

There is no denying that bodybuilding has changed dramatically since the golden era of the 1960s-1980s. Back then, the competitors...