William Bonac has been the silent conquerer. The IFBB pro bodybuilder who continues to rise up in the Mr. Olympia and improve upon every show. He is a respectable and consistent athlete that can even threaten Phil Heath & surpass Big Ramy and become a future Mr. Olympia.

Many well-known athletes and vendors are in Dubai for the Dubai Muscle Show, that’s where William Bonac confronts YouTuber Luimarco.

Luimarco was giving an interview at the expo in one of the stands when William Bonac first confronted him, Bonac asked Lui ‘not to talk about him in any way’.

The situation quickly heated up when Bonac and Luimarco came face to face; we can hear Bonac telling Lui:

“You know what you are saying… do not disrepect me… Listen.. if you ever wanna say shit to me… says it to my face… if you ever fu**ing drag me again… don’t bother me and I won’t bother you…. fuck out of my way… don’t ever put my fucking name… “

“Do not ever threaten me again”

“Willam you are nobody”

First Phil Heath and now William Bonac the 3rd place winner of Mr. Olympia 2017, Lui must have great skills to anger these massive bodybuilders. A lot of individuals will tell you that internet personality like Luimarco has a career that relies entirely on trash talking, he is an internet troll who simply craves increased viewership. But you’ll also hear a great deal of his supporters refute that ideology by saying that Luimarco simply likes to speak his truth. We all have opinions and that very attribute allows for many different and intriguing points of view.

We don’t know the whole story yet (especially the Willam Bonch side) but here is what we know so far:

Apparently, William Bonac did not agree with what Lui spin in one of his videos.

Luimarco states Bonac came to my booth interpreting my interview and started yelling with some threats… I proposed to him talk calmly, but he declined. He might have the huge disagreement with my blogs or reports.. not once not twice, but three times Bona confronted me, also during my interview with an athlete….

So how did this all started?

This whole story started when lots of you guys were tagging me on a pic posted by Roelly after he won vs Bonac in Prague. That pic was probably a repost made by Roelly and there was some back and forth infighting on the comment section between Bonac and some other people and so my followers were tagging me but I didn’t want to have anything to with it! And then Bonac made a harsh comment like : go lick your luimarco’s ….. to my followers and so I wrote to him on DM like dude I thought we were friends and this screenshot here was probably the last thing we said me and Bonac before he blocked me : for him it was a Threat when I told him why doesn’t he move to Kuwait like Roelly did in a sense that he might get better since in my opinion, he was not in shape in Prague and lil Watery….. I know that William is not an English speaker but saying that this was a Threat is absolutely laughable at best and you guys saw the full footage of that rage he put in a public show. And hell I invite William to publish all the conversation I had with him for everyone to see. I let u be the judge: you should move to Kuwait is the sentence that created all this incident. 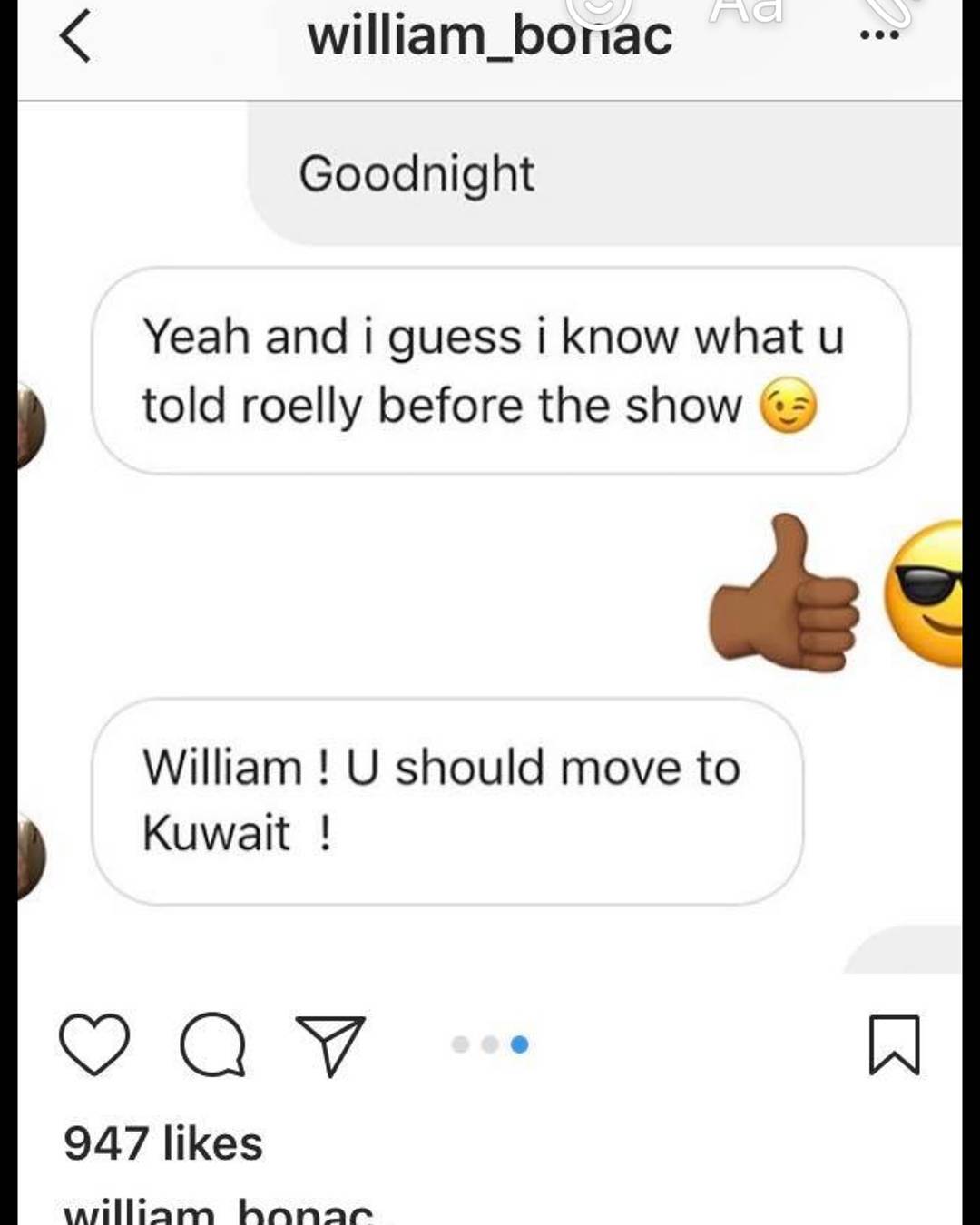 Bonac the IFBB pro who placed 3rd at Mr Olympia! I let you be the judge !!! I never did a single negative video about him and i have always been praising him and giving him prompts on records. How professional is this! I was in a middle of an interview with @zacaynsley . He got mad cause few months o told him on a private message that he should mo ve to Kuwait. It triggered him 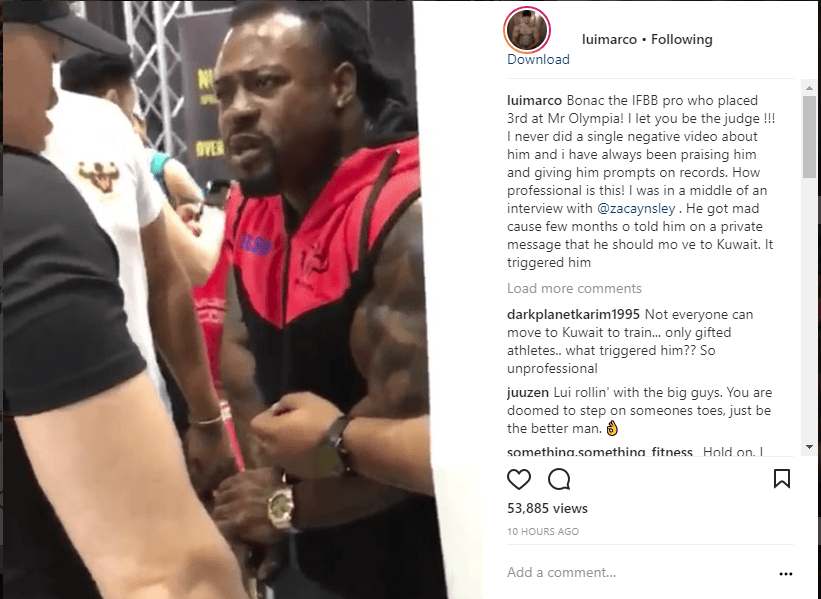 William Bonac saluting me before Olympia 2016 for all the support i gave this guy !!! Hell on record on my latest 2017 Mr Olympia videos i said Bonac or Ramy should have won either or !!! I’m over seas and i have no access to my YouTube editing and all my fans know that i never posted a single negative thing about Bonac . Apparently now if you wanna trigger Bonac just tell him to move to Kuwait

Well, this is according to the Luimaro. We contacted William Bonac and still waiting for his side of the story.

On a personal note:

What right does Luimarco have to tell an IFBB Pro who was placed 3rd at Mr. Olympia 2017 “he is a nobody” and “Bonac your finished!”. Finished from what exactly Lui? What Lui has accomplished in the bodybuilding, at any level so far???

We all have our point of view and we can analyze a show but when it gets personal, the situation can get ugly.

I think, as Luimarco finally has come out from behind the camera and he’s going to bodybuilding competitions, he is coming face to face with a lot of bodybuilders that he’s been discussing all these years he weren’t really so pleased with them, so it is not going to a smooth ride as he might thought.

Anyway, what do you think of this whole situation?