They don’t call 7-time Mr. Olympia Phil Heath ‘The Gift’ for nothing. Heath’s natural genetic ability has catapulted him to the pinnacle of bodybuilding, winning the Mr. Olympia contest 7-times. But all that success didn’t come easy, Phil Heath hits the weights with an intensity that is rarely seen among the pro ranks.

Phil Heath has about as much muscle mass as any human could possibly fit on his chest. Therefore, his focus now needs to be on creating fullness, hardness, and density that will make his pecs pop on stage. And here’s exactly how he does it:

This is a great move that combines the feel of free weight training with the control of a pre-designated track movement path. Phil goes heavy with as much five 44lb plates on each side. He makes sure to get a full contraction and stretch on every rep.

TIP: Rest between sets is as long as it takes his partner to pump out a set; approx. Two minutes.

Phil follows up his heavy pressing movement with the ultimate shaping and stretching exercise. He makes sure to perform his flyes in a slow and controlled manner, getting a full ribcage and pec expansion. At the bottom of the eccentric phase of contraction, he’ll turn his wrists down toward the floor in order to get an extra 1% stretch. On the way up he’ll arc the weights until he achieves a peak contraction. To complete each rep, he’ll forcefully squeeze the pecs and repeat.

TIP: Keeping his chin up while he’s doing flyes helps Phil to get a good squeeze. And rather than locking his arms out, he keeps then slightly loose to allow for an even greater range of motion. Rest for 45-60 seconds between sets.

The third exercise has him back on a heavy compound pushing movement. The leverage chest press allows him to get as full as possible while adding in as much detail as he possibly can. It keeps tension on the muscles and allows for an exaggerated eccentric portion of each rep.

Phil loves doing the leverage chest press during his pre-contest prep as it allows him to etch in the detail that he has become renowned for.

TIP: Using machines rather than free weights pre contest allows him to go heavy without the risk of injury that free weights carry.

The incline cable flye is another excellent move to bring out the detail, especially in the inner pecs. When he’s doing his cable flyes, Phil likes to imagine himself performing the most muscular pose onstage. The cable fly is an excellent way for Phil to keep constant tension on the pecs throughout the entire movement.

TIP: By doing this exercise on an incline bench allows you to specifically bring out the cuts
in his upper pecs. 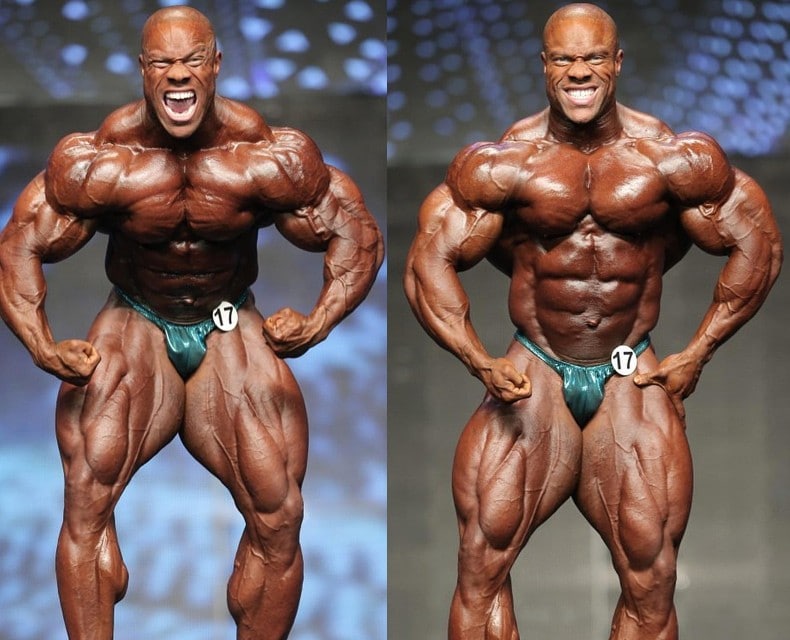 Phil uses the E-Z curl bar to work on his biceps peak. His reps are slow and controlled, with an emphasis on the negative phase of contraction. Rather than simply going through the motions, he makes sure that he gets a good contraction and pump on every rep.

This exercise allows the arms to be extended more than on a regular curl. It also locks in your elbow, meaning that there is nobody movement whatsoever – it’s all about bicep isolation. That makes it a great movement to bring out the biceps split.

This is another great isolation movement to build a massive peak on the biceps. Phil Heath uses a narrow grip and a high, angled bench to get a full extension on every rep. For variation, he mixes it up between barbells and dumbbells.

Hammer curls allow Phil to bring out the size and detail of his forearms and more specifically his brachioradialis muscle which works to flex the forearm at the elbow joint, and which makes up the majority of the meat of the forearm.

Phil does his pulldowns one arm at a time to really focus on bringing out the cuts in his triceps. He keeps his elbow tucked in at his side to ensure that the entire focus is on the three horseshoe-shaped muscles that make up the triceps.

To achieve a physique like Phil’s takes much more than following a physical exercise blueprint. The Gift himself explains what it takes to succeed.

You’ve got to come in here with a good focus and have pride and purpose in everything you do in here. And I guarantee you’re going to get results. I feel like having that mindset every day – trying to be better than the previous workout, the previous day – has given me a ton of different gains and has allowed me to bring forth the physique that I never thought I could ever bring.– Phil Heath