Jon Jones is currently in the midst of the adjudication of the second potential  U.S. Anti-Doping Policy violation s a four-year suspension. But the UFC VP of Athlete Health and Performance Jeff Novitzky, don’t think that Jones intentionally cheated when he popped hot for the second time.

Following his victory over Daniel Cormier at UFC 214, Jones was tested positive for the steroid Turinabol in a sample collected on July 28, 2017, the day prior to the fight. He was provisionally suspended by the U.S. Anti-Doping Agency. The UFC stripped the title from Jones and returned it to Cormier. Jones has publicly denied using performance-enhancers. 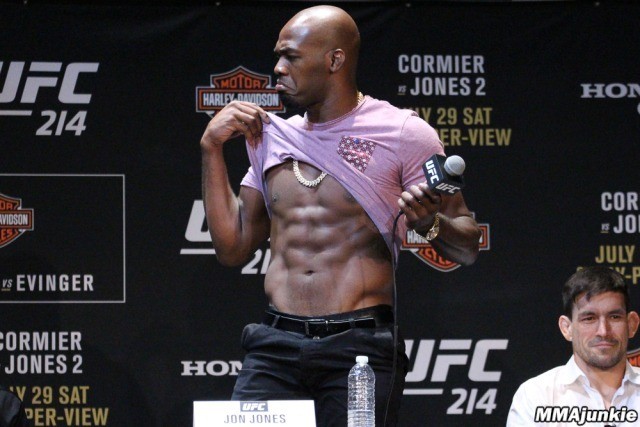 Jeff Novitzky appeared on the “Joe Rogan Experience” podcast and discussed the publicly known details of Jones’ case. Novitzky referenced Jones’ first case with UFC anti-doping partner USADA, a positive pre-fight drug test that led to the cancellation of a title unifier with Cormier at UFC 200. After Jones contested USADA findings, an independent arbitrator ruled that he had not intentionally cheated but had been reckless in his use of an over-the-counter supplement. But still, Jones received the maximum punishment allowed under the UFC’s anti-doping rules.

“It would not make a lot of sense for an individual, a UFC athlete who knew, especially a championship contender like Jon Jones, who knew, ‘Hey, I’m tested quite regularly in this program.’ It wouldn’t make a lot of sense that that would be your drug of choice if you were intentionally trying to cheat,” Novitsky explained during a recent appearance on Joe Rogan’s podcast.

“I think it’s come out after the fact that USADA did another test on Jon, a month or two or a couple of months after his positive test, and he was negative during that test. So that would be indicative that the prohibited substance entered his system sometime after July 7th or 8th, and was likely a pretty small amount and it cleared his system pretty quickly.”

That would mean Jon Jones received a very little benefit if he intentionally ingested Turinabol in such a manner. To Novitsky, it just doesn’t seem to make sense.

Despite his first anti-doping violation being chalked up to recklessness, Jones received the maximum one-year suspension. As such, the starting point for Jones’ second violation, minus mitigating circumstances, is a four-year suspension.

Novitsky indicated that, if Jones didn’t intentionally ingest Turinabol, the anti-doping violation policy put in place wasn’t meant to force a four-year suspension on him, and he doesn’t believe that Jones would deserve it. However, Novitsky does not have a say in the matter.

charged with working hand in hand with athletes to follow it, Novitsky doesn’t administer the adjudication of violation cases. That is the charge of USADA.

“Again, who knows where it plays out? But on the surface of things, at this point in the game with that type of information out there, it wouldn’t indicate intentional use. That could be wrong. I don’t know that definitively, and we’ll see how this plays out.”

Novitsky indicated that Jones and his team have been working closely with USADA to try and determine how Jones ended up with Turinabol in his system, but at this point, any information about the case is confidential until Jones makes public comments or the case is adjudicated.