Complete results and recap from the 2021 Arnold Strongman UK contest 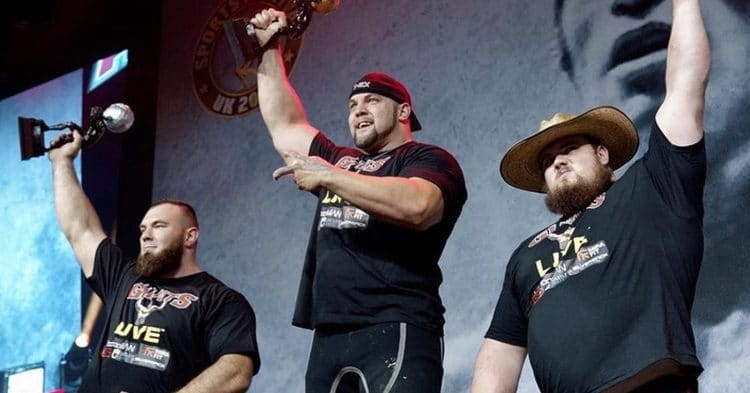 The Arnold Strongman UK took place as part of the Arnold Sports Festival UK, going down in the final day. This has been a wildly exhilarating festival, featuring bodybuilding contests, CrossFit, arm wrestling, and more across a three-day span with fans in attendance for the whole thing.

The strongman portion of the event featured ten competitors, being made up of a multitude of the top athletes the sport offers. Ranging from both the 2020 and 2021 World’s Strongest Man winners, as well as Giants Live champions and more, this was one of the most intriguing strongman contests of the year.

The one-day contest saw five events take place before the 2021 Arnold Strongman UK winner was determined. These events tested a variety of skills, ranging from grip strength to endurance, and raw power.

Tickets sold out before the festival began, but if you wanted to watch the event you could through the Giants Live Facebook live stream. That said, if you were unable to see the action there, we have the complete results below.

Winners are as below:

*Takes a higher position on tie-breaker

The Stoltman brothers, current Europe’s and World’s Strongest Man winners had to withdraw early on to avoid getting any injuries.

Once again Mark Felix dominates the Hercules Hold and proves that no one can touch him when it comes to grip. He has been destroying competitors in this event for years now and it seems that now at 55 years old, he’s just entering his prime.

For their second event, another grip-related challenge was set in front of the Strongman elite. This time it was the 400 kilograms (881lbs) frame carry which they had to carry across a distance of 20 meters in the fastest time they can. The Ukrainian fast-rising superstar and former WSM, Oleksii Novikov shows why he is the name on the top of every Strongman fan’s tongue.  He’s fast, agile and his strength is only getting better.  He dominates the event with a time of 7.35 seconds.  Evan SInglet

Evan Singleton, the super-strong American, came in second again, showing that he will be breathing down the neck of top guys for the foreseeable. His time was a tad bit slower than Novikov’s as he clocked in at 8.50 seconds. Since this was a grip event, it was no surprise that Mark Felix notched another top 3 position for himself, clocking in at 9.75 seconds.

The UK crowd’s favorite, and current Europe’s Strongest Man, Luke Stoltman had to withdraw from the entire contest managing to rack in 7.05 meters before calling it quits.

The rules of the event were as follows; competitors get a full minute(60 seconds) to deadlift the axle bar(a very thick-handled bar) that’s loaded with 360kg/793.4lbs for as many reps as possible The winner of the event was last year’s  World’s Strongest Man winner, Oleksii Novikov with eight reps. With one rep less, was the 2021 Shaw Classic winner, Trey Mitchell. Trey has been consistent with deadlifts for some time now, so a second-place ranking is nothing surprising.

Going into this event, Oleinik was riding a confidence boost high as he won two prior events. It also, helped that he currently holds the world record in overhead pressing a dumbbell for reps, with 11 reps in 75 seconds.  Naturally, being the record holder he won the event with eight reps, with Evan Singleton being one rep shy of tieing for the first place with seven. Third place was a two-man tie between Trey Mitchell and JF Carron.

The final event was a classic Strongman event, the Atlas stones. Even though the event has recently seen a christening of a new name, it’s still the same event. You get huge, heavy-ass stone globes and your goal is to place them on the elevated pedestal in as little time as possible. It’s intense, it’s brutal, it’s exhausting and it’s fun to watch. It’s everything a Strongman event should be. The winner of the event was the current Scotland’s strongest man, Andy Black, with five stones in 18.28 seconds,  followed by Trey Mitchell who was less than half a second slower than Andy Black with an equal amount of stones. Third place went to the American-Evan Singleton also with five stones in 19.44 seconds.

After the final event, Novikov and Singleton were tied for first place with each having 42 points. However, Singleton finished higher on the stones, so that means he got the “nod” over who gets to be declared champion.

Congratulations to, Evan Singleton, the overall winner of the 2021 Arnold Strongman UK. This was an exciting competition from start to finish.