Eddie Hall accepts an apology and the $10,000 bet from Larry Wheels 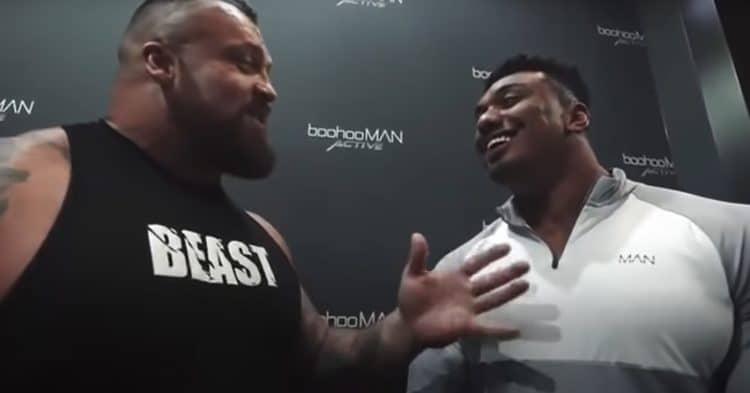 It is not a secret that Eddie Hall and Hafthor Bjornsson’s beef is not fabricated to sell a fight or create a stir in the media. The retired strongmen have no love lost between them and those picking sides publically are bound to draw the ire of the opposite party. Powerlifter Larry Wheels declared his support of Hafthor Bjornsson in a social media post back in June – that got Eddie Hall’s attention for all the wrong reasons. So when he recently came face to face with Hall at an event, things got a little too awkward.

In preparation for his boxing match against Eddie Hall that was due to happen in September, Hafthor Bjornsson had a few training sessions with Larry Wheels. The 27-yer-old powerlifter declared his support for The Mountain and jokingly told him to ‘knock the head off of Hall. Digital artist Taurus Art and NFT’s created a graphic depicting Hafthor Bjornsson holding the decapitated head of Eddie Hall with Larry Wheels in the foreground. Wheels went on to post the graphic on his Instagram account. The post did not go unnoticed by Eddie Hall, who then reposted it and blasted Hafthor Bjornsson and Larry Wheels for their unprofessional and unsportsmanlike behavior. Hall then went on to challenge Larry Wheels on Twitter for a $10000 bet on who wins.

When Eddie Hall and Larry Wheels crossed paths at an event recently, it was obvious that Hall was not over the unpleasant social media altercation and confronted Wheels with a quiet but intimidating demeanor. Reluctant to engage, Wheels tried to stir the conversation away from Hafthor Bjornsson and inquired about the bicep injury. However, the conversation led to some awkward back and forth between the two. Eddie Hall and Larry Wheels seem to have been on good terms with each other before Wheels declared his support for Bjornsson – the primary reason for Eddie Hall’s agitation.

Courtesy to Larry Wheels’ YouTube channel, here is the specific interaction that took place between Larry Wheels and Eddie Hall:

Thor and The Beast are likely to fight in March 2022

Larry Wheels claimed that his post was nothing more than an attempt to get fans interested in the grudge match between Eddie Hall and Hafthor Bjornsson. However, Eddie Hall’s bicep injury and subsequent surgery forced him out of action and killed the hype around the fight for time being. Bjornsson ended up fighting arm-wrestling ace Devon Larratt on September 18 and won the fight via first-round knockout.

Eddie Hall has made a significant recovery from the injury and if everything goes well, he will fight Hafthor Bjornsson in the first quarter of 2022. Hall and Bjornsson have both vowed to produce a knockout. All it takes is one big shot to close the show when big men compete. Who do you think lands the first big shot though?