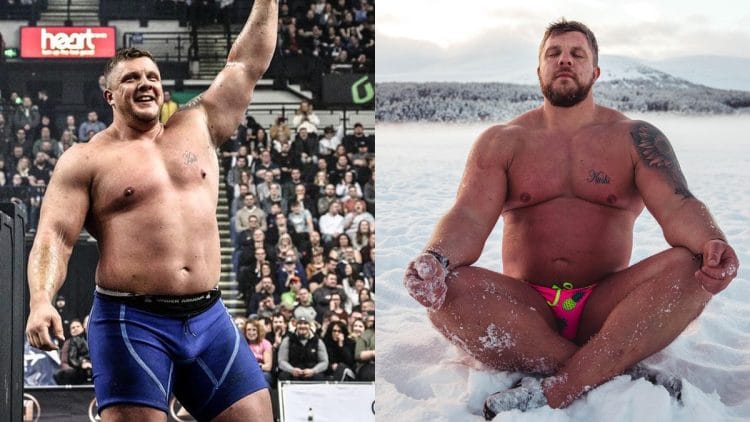 Luke Stoltman is a professional Strongman athlete from Scotland. He is a five-time winner of Scotland’s Strongest Man (2013-2017) and won Europe’s Strongest Man contest in 2021. Luke is the older brother of 2021 World’s Strongest Man (WSM) champ, Tom Stoltman. This is his complete profile, biography, training regime, diet plan, and more.

Born on Nov. 22, 1984, Luke grew up in Scottish Highlands without access to specialized strongman training equipment — meaning, he had to make his own equipment using what his surrounding landscape had to offer.

Luke and his younger brother Tom refer to themselves as “The World’s Strongest Brothers.” They made history by becoming the first siblings to make it to the finals of the World’s Strongest Man competition in 2021 — which Tom went on to win, making him the first-ever Scot to gain the title.

“We didn’t have any of the specialist equipment that most strongmen gyms have. You’d have to travel to Glasgow or even England to get the good equipment.”

Unlike his younger brother Tom, a full-time Strongman, Luke is a dimensional surveyor working on oil rigs. Luke’s full-time job has kept him away from training for at least two weeks out of a month for most of his strongman career. He started working at the oil rigs when he was 18 years old.

“We need to keep pushing the NHS [National healthcare System] – it’s not a privilege to have the NHS, it’s our right to have it. We pay for it. It is our right to have proper care,” said Stoltman while disclosing that his family has been directly impacted by the way the health care group has been run.

At the time of this article’s publication, Luke Stoltman has competed in 36 strongman competitions — 21 international and 11 national. He has competed in six World’s Strongest Man contests, with his best placing coming in 2019 and 2021. Luke finished seventh in both WSM finales.

Stoltman is one of the most dominating Scotland’s Strongest Man contestants. He won the competition for five consecutive years (2013-2017) and followed it up with two runner-up finishes in 2018 and 2019 behind his younger brother Tom.

Luke Stotlman appears to be in great form in the 2022 strongman season. He placed third at the 2022 Arnold Strongman Classic (ASC) behind 2019 WSM champ Martins Licis and 2020 WSM winner Oleksii Novikov. Luke followed it up with a second-place finish at the 2022 Europe’s Strongest Man behind Oleksii Novikov.

The World’s Strongest Brothers created history at the 2019 WSM contest by becoming the first siblings to compete against one another in the WSM finals — Luke came seventh and Tom fifth. Furthermore, the Stoltman brothers registered another record when they both podiumed at the 2019 World’s Ultimate Strongman (WUS), with Luke placing second and Tom third.

Per Strongman Archives, here is a snapshot of Luke Stoltman’s competitive career —

Luke Stoltman manages a full-time job along with a successful Strongman career. The World’s Strongest Brothers own a Strongman training facility in their hometown, which proved to be a life-saver during the COVID lockdowns.

The Stoltman brothers love lifting heavy stuff and putting it back on the ground. They never gave up training, even during the pandemic, and turned to their training facility for intense workout sessions.

“We already knew for a while World’s [Strongest Man contest] was on, off, on, off,” says Luke, “so we were coming down to the gym just to train – that helped us through lockdown, that was a good thing.”

When Luke is not offshore at his job, The World’s Strongest Brothers usually train together. The 2021 WSM champ credits his success to his elder brother. “If Luke didn’t do Strongman I would be playing football or doing something else,” says Tom. “If he didn’t compete I never ever would have thought to do Strongman.”

Strongman training is pretty straightforward. Most strongmen prepare for contests by performing the same lifts in training that they would be doing in the show. Below is the training routine Luke Stoltman followed before the 2022 Britain’s Strongest Man contest. Tom ended up winning the show, while Luke had to withdraw after the second event — axle deadlift.

Luke Stoltman starts the exercise on a metal log with 90 kilograms (198 pounds) on the bar. He then performs a couple of reps with a 110-kilogram log. The final set on the metal log is a 130-pound (286-pound) press which Luke makes look effortless.

The strongman then switches to a wooden log to add variety to his training. A wooden log is wider than a metal log and changes the dynamics of the lift completely, demanding more core stabilizer activation.

His first set on the wooden log included a monster 140 kilograms (308 pounds). The Stoltman brothers then proceed to crush 160 kilograms (352 pounds) on the second set of the wood log press.

For the third set of the wood log press, The World’s Strongest Brothers ramp up the training intensity considerably by putting 200 kilograms (440 pounds) on the log.

The Stoltman brothers start each training session with 10-15 minutes of warm-ups. They use both static and dynamic stretching movements to get their muscles ready for their intense workout routines.

Luke tweaked his back while performing the last set of the wooden log press, which made him call it a day. Tom, nonetheless, marched ahead with the second exercise of the session.

Diet plays a crucial role in any strength sports routine. Strongmen are known for their supernumerary diets, and Luke Stoltman is no different. He eats around 8,000 calories a day to maintain his ginormous strength and physique. Notably, Luke can bump up his calorie intake to 13,000 kcal a day while prepping for a strongman contest.

“It’s hard, it’s tough to eat 8,000 calories day in, day out. You just feel so bloated, so horrible eating that food. Some guys can do it, Brian (Shaw) and Hafthor (Bjornsson) just do it for fun now, but I need a little more practice.”

Per Stoltman siblings, the COVID-19 lockdown posed a new challenge in their dieting routine. Since they could not visit the supermarket during the lockdown, they had to rely on a meat delivery service for their daily dose of protein.

“It’s not easy to be that bodyweight when you’re competing at that high a level,” added Luke. “Because your body is so used to being fed a certain way, training a certain way – so if worse case came [eating like a normal person], during lockdown, we would be seriously, seriously affected. We could potentially lose 20 kilos in that month.”

The diarrhea meds aren’t because Luke is always constipated. It’s because the minerals and electrolytes in the meds are incredibly effective at reducing muscle cramps.

This is what Luke Stoltman eats on a typical day:

Unlike bodybuilders, strongmen do not eat six to eight small meals throughout the day, especially during the off-season. There could be two reasons behind strongmen not eating frequent meals.

First, strongmen do not need to maintain a low body fat percentage to win a show. Secondly, and more importantly, multiple studies have compared eating many smaller versus fewer larger meals and concluded that there is no significant effect on either metabolic rate or the total amount of fat lost. [1][2]

Eating like a strongman isn’t easy. There are days when the best of the best cannot meet their daily calorie goals on a clean diet. For days like these, there are cheat meals.

Tom Stoltman works offshore for a company that does a lot of work in the North Sea, which keeps him in a calorie-deficit state. The strongman makes up for the calorie deficit by eating cheat meals two or three times a week.

“We have takeaways, we have pizzas, those are the days we’re struggling to consume that kind of bland food day in, day out, and we need to make up the calories.”

The last couple of shows that Luke competed in were a success as he got a podium finish in both — third place at the 2022 Arnold Strongman Classic and a runner-up finish at the 2022 Europe’s Strongest Man.

Stoltman has the momentum behind him, and he will look to seal the deal with a first-place finish when he steps foot in the 2022 WSM arena (scheduled for May 29-29 in Sacramento, CA). It’ll be interesting to see how Luke fares against his younger brother Tom Stoltmam, who is also the defending WSM champion.