The 2022 Australia's Strongest Man/Woman featured some great athletes, but Osborne and Clair came out victorious. 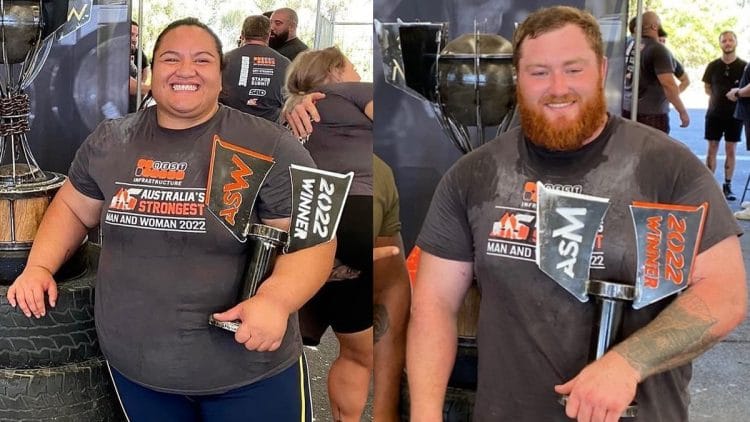 The 2022 Australia’s Strongest Man and Woman contest held in Melbourne on March 27th, 2022. The competition gathered the most elite strongman and strongwoman athletes from the country, and they got the chance to battle it out for the most prestigious national title. However, only the greatest competitor from each division could be crowned as Australia’s Strongest, and it was Jordan Osborne and Alirene Clair who stood atop the podium.

Thomas Wren took the most points in the first event of the 2022 Australia’s Strongest Man, and was closely followed by El Masri and McCall. The overall winner, Jordan Osborne, had a slow start as he only collected 3.5 points. However, Osborne quickly got himself in a title race, as he won the next event ‘Max Block Press’.

El Masri got his first win in the third event, which was the Farmer’s Walk. Osborne once again placed fourth and put himself in a tight battle with the rest of the field. However, Osborne managed to gain his advantage back in the fourth event, having finished first. In addition, El Masri finished in sixth place, which gave Osborne some room to breathe.

Sean Gillen got his first win of the competition in the fifth event, which was the Deadlift Ladder. Despite claiming an event win, Sean Gillen was far off from challenging for a podium place finish. Osborne placed fifth in the same event, but still remained in the first place.

Canini was dominant in the sixth, seventh, and eighth events, but he was too late to get involved in the title race. Osborne posted a few solid performances in these events and claimed the win.

Having won the last event, Canini got the advantage over El Masri, as they had the same amount of points. In addition, only one man withdrew from the competition, which was Corey Polkinghorne.

The winner of the 2022 ASW, Alirene Clair, started the competition by winning the first two events (Squat Lift & Max Block Press) and built up some great momentum for the remainder of the contest. However, the Farmer’s Walk proved to be extremely difficult for her, as she placed sixth. She then managed to get her focus back and won the next three events (Fingals Fingers, Deadlift Ladder, and Log Lift).

Clair rounded up the competition and secured her win with mid-table finishes in the final two events. Kamitunga secured a second-place finish with a solid performance overall and one event win.

The 2022 Australia’s Strongest Man featured an interesting battle, as the placings were swapped between athletes after every event. On the other hand, the Strongwoman contest was a one-woman show, as Alirene Clair dominated the field.