JF Caron insinuated that his recent injury will be the ultimate cause of his retirement from Strongman. 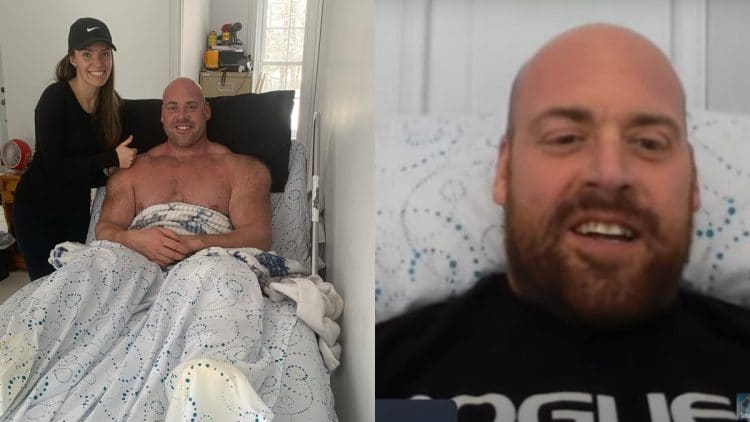 Nine-time Canada’s Strongest Man JF Caron is a true legend of the Strongman sport, but he has recently suffered a serious injury at the 2022 Arnold Strongman Classic. While performing the Log Lift event, Caron’s left leg slipped and caused both of his quads to tear as well hurt his ankle. On March 29th, JF Caron joined Big Loz to talk about his injury and future plans. Considering the severity of the injury, Caron may be forced to retire from competitive strongman.

JF Caron is now in the process of re-learning how to walk again, which he describes as very painful and taxing. He lost over 60 lbs in the process as he cannot engage in almost any physical activities. Caron is now sitting at around 130 kg (286 lbs) bodyweight. With all these setbacks in a short time frame, Caron explained that this injury will probably force him to retire.

“I really think that Strongman is done.”

Related: Strongman JF Caron Wins All Three Events To Stand Atop The Podium At 2022 Força Bruta

JF Caron also explained that some people compared his situation to Zydrunas Savickas’s major injuries. However, Big Z was only 22-years-old when that happened, while Caron is 39. When asked about his future in the sport, JF replied,

“I don’t want to risk it… You also have to think about life after Strongman… For 20 years, I have been doing massive squats and Strongman events, but there is a price to pay.”

While consulting with his doctors, JF Caron concluded that his injury was just an accident. It had nothing to do with his warm-up or previous event in the 2022 ASC. Caron is very thankful for the ASC staff and organization, as they helped him immediately after the injury. The doctors also gave him an expected time frame for this recovery.

“They (The Doctors) say that it is a one year recovery.”

JF Caron explained that he will do everything in his power to recover as quickly as possible. He has already gotten in touch with multiple professionals for some alternative models of recovery, which could speed up the process.

Courtesy of Big Loz YouTube Channel, you can watch the full interview here:

JF Caron is arguably the most active Strongman athlete in the history of the sport. He has taken part in numerous competitions and consistently posted amazing results. His greatest achievements are finishing in third place at the 2020 World’s Strongest Man and claiming the Hummer Tire Deadlift World Record at the 2020 Shaw Classic.

JF Caron is also widely recognized for his impressive static strength, as his squats and deadlifts are almost incomparable to anyone. Furthermore, Caron has taken part in 11 World’s Strongest Man contests and placed in the top 10 on 8 separate occasions.

JF Caron still has a lot of love for Strongman and could do some contests, just not at the highest level. Just 2 days ago, Caron announced that he is available for online coaching and training plans. Following his impressive career as a competitor, he could potentially become an even better coach.