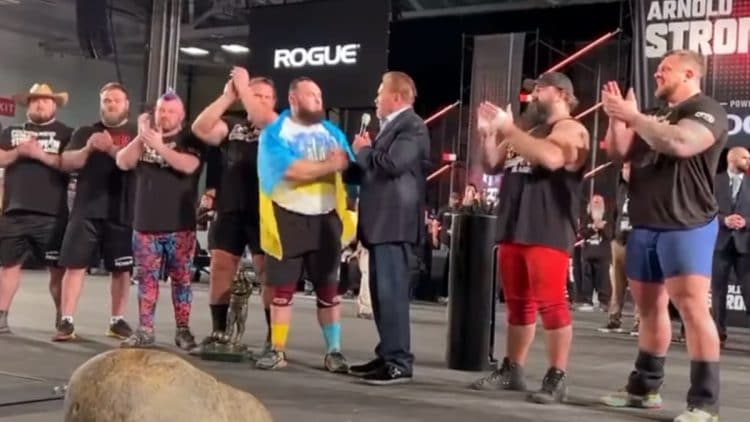 Novikov’s country is currently engaged in an armed conflict with the neighboring Russian Federation over geopolitical issues. Oleksii Novikov has been raising money to help the Ukrainian war efforts. During the award ceremony of the event, Arnold Schwarzenegger drew attention to the power of sports to bring people together and said:

“We always see how sports bring everyone together. We’ve seen here not only the strongest men in the world competing but we also have seen a Ukrainian athlete and a Russian athlete competing in the same competition.”

Arnold further admired Oleksii Novikov and Russia’s Evgeny Markov for sending a message of peace to the world as the roaring crowd gave a round of applause. The seven-time Mr. Olympia then went on to reveal that Novikov intended to donate the money earned from the 2022 Arnold Strongman Classic to buy body armors for his fellow countrymen.

“Novikov I have to tell you that… I know that you have to go back to Ukraine to fight and to risk your life and you also… I know that you wanted to take the cash money that you’re making here today and donate it to buy body armor to protect innocent people in Ukraine,” Arnold Schwarzenegger continued.

The prize money for the silver medalist was supposed to be $25000. However, Arnold announced that Oleksii Novikov will receive the same prize money as the winner ($80,000).

Oleksii Novikov is a Ukrainian strongman competitor and the 2020 World’s Strongest Man. Novikov is the second Ukrainian to win the competition after 2004 WSM Vasyl Virastyuk. He won Ukraine’s Strongest Man from 2016 to 2019 and rose to prominence with a seventh-place finish at the 2019 Arnold Strongman Classic.

Oleksii Novikov dominated the Monster Dumbbell event at the 2022 Arnold Strongman Classic. He went on to secure a second place with a total of 37.5 points behind Martins Licis (41 points). Novikov is currently studying trade and economics at the Kyiv National University in Ukraine. Oleksii Novikov is undoubtedly an established name in the strongman competition. Looking at his most recent performance, the future only looks bright for him despite the uncertainty brought by an armed conflict in his country.