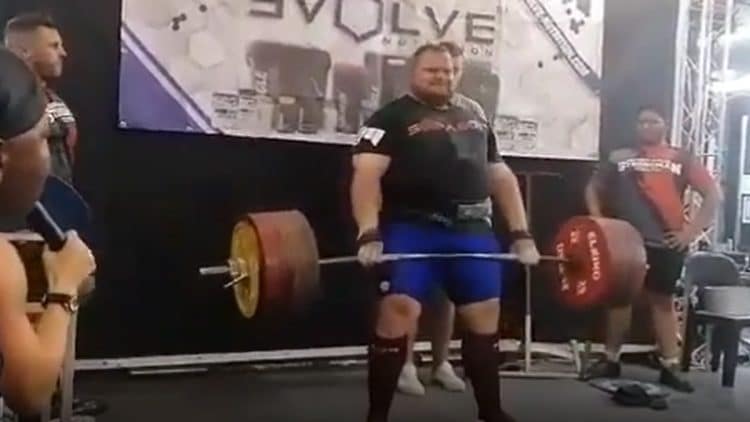 The 2019 Africa’s Strongest Man, Chris Van Der Linde, has once again caught the eye of the Strongman community. It is a well-known fact that Chris is incredible in static lifts, but he just pushed the boundaries and became the first man in Africa to officially deadlift 1000+ lbs. Chris managed to do so at the 2022 SA Log, Deadlift & Axle Competition, which took place on March 19th, in Sunninghill, South Africa. He pulled 455 kg (1003.1 lbs) to set a new African Record.

Chris Van Der Linde performed the deadlift in his socks, while also using straps and a lifting belt. His stance for this lift was conventional. Chris’ deadlift went up with serious speed, but he struggled a bit in the lockout phase. Chris also held the previous African Record of 440 kg (970 lbs), which he set at the 2021 Africa’s Strongest Man contest.

Chris Van Der Linde also took part in the axle press event at the same competition, and it went extremely well. Chris ended up lifting and pressing a 175 kg (385 lbs) axle for a new South African Record. The most impressive part of the lift was that Chris did a strict overhead axle press without any dipping in the knees. For this lift, he only used a lifting belt and elbow sleeves.

You can watch the axle press here:

At 30-years-old, Chris Van Der Linde has made some success in the sport of Strongman, but it seems like he is getting better as time passes. He has taken part in 4 major competitions, including one WSM appearance in 2021. However, he got injured in the first event and had to withdraw. There is no doubt that he would love to get another opportunity, and following his recent performances, his wish could be fulfilled.

Chris Van Der Linde is definitely one of the greatest deadlifters at the moment, as only a few people in history have deadlifted more than him. Most notably, Eddie Hall was the first person to deadlift 500 kg (1102.3 lbs), and Hafthor Björnsson who holds the official World Record Deadlift of 501 kg (1104.5 lbs). However, Chris is slowly approaching Ivan Makarov and Peiman Maheripour, as both men aim to pull 505 kg (1113.3 lbs).