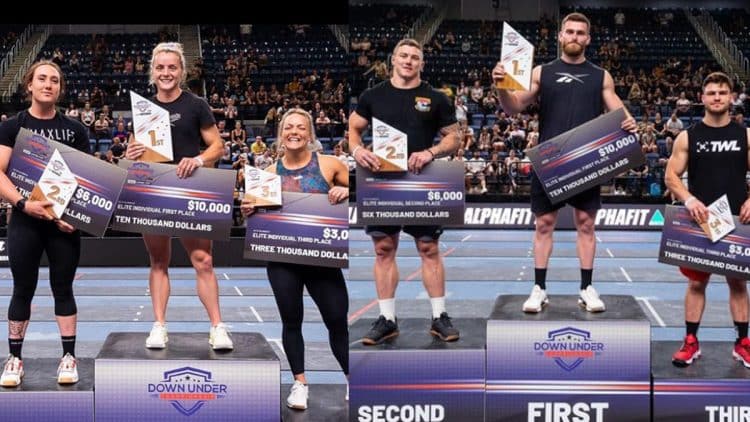 Being one of the final exciting CrossFit competitions of the year, the 2022 Down Under Championship drew a large crowd of spectators. The competition took place on the sunny weekend of November 18-20, 2022, in Wollongong, Australia. So, many athletes were thrilled to compete. As for the individuals, both Jay Crouch and Madeline Stuart managed to win their respective men and women’s divisions with incredible performances throughout the entire competition.

The contest also consisted of multiple divisions, and the majority of fans were also focused on the Elite Men’s Teams division, as it featured some of the CrossFit Games competitors. In the end, the Men at Work team consisting of Noah Ohlsen, Saxon Panchik, and Chandler Smith won. As for the Women’s Teams division, it was won by LSK Gold, which consisted of Briony Challis, Christee Hollard, and Emily Derooy.

2022 Down Under Championship Results (Top 5)

Individuals had six minutes to perform 75 snatches in the fastest way possible. Men lifted 35 kilograms, while women did 25 kilograms.

Katelin Van Zyl had the greatest start to this competition in the women’s division, having completed the workout in 2 minutes and 40 seconds. Finishing 12 seconds behind her was Madeline Sturt, while Lauren Fisher got third another four seconds later.

Jay Crouch and Jake Douglas had a proper race in event one, but Crouch managed to finish just three seconds earlier. Peter Ellis was the third guy to finish.

Madeline Sturt continued her pursuit of the title, having followed up her second-place finish from the previous event, with a victory in this one. Christina Livaditakis and Georgia Pryer followed in second and third respectively.

Peter Ellis was the standout athlete in the men’s division, while Jay Crouch dropped to second place. Only three seconds separated these two men, while Zeke Grove came in third 11 seconds after Crouch.

Grace Walton apparently had the best sleep after day one, having topped the results sheet of event three. Gemma Hauck was the second woman to cross the line, while Daisy McDonald got third.

Jake Douglas started off day two as the best men’s athlete having completed the sequence in 3:31.00. Jay Crouch also continued putting up incredible performances and got another second-place finish. Andrew Sambell wrapped up the top 3.

Marine Sykes was the first one to finish amongst the women, having crossed the line after 15 minutes and 19 seconds. Georgia Pryer missed out on the victory by just two seconds, but still earned a valuable second place and 95 points. Katelin Van Zyl appeared in the top three once again, but this time in third.

The incredible Jay Crouch continued with his world-class performances and grabbed his second event win of the 2022 Down Under Championship. Peter Ellis, who would ultimately win bronze overall, showed that he did not come to play, having finished in second place. Harrison Rowley found his element and got third in this event.

Christina Livaditakis won the last event of the day and was followed by Grace Walton and Julia Hannaford who shared a second-place finish.

Isaac Newman rose to the occasion on event five and won the event. Both him and Jake Douglas lifted the 130-kilogram snatch, but Isaac came out victorious having done more double unders. Clint Kohl finished in third having snatched 127.5 kilograms.

Getting her second consecutive event victory, Christina Livaditakis made a massive push toward an overall podium finish at the start of the final day. Finishing with a 30-second lead over second-place finisher, Daisy McDonald, Christina added 100 points to her score. Lauren Fisher of the USA got third.

Jay Crouch wasted no time on day three and decided to cement his overall victory with a first-place finish in event six. He finished with a time of 9:17.00, which was more than enough to beat the second-place Peter Ellis. Zeke Grove finished an additional 45 seconds after Ellis and got third.

Not leaving anything to chance, Madeline Sturt won the final event with an incredible time of 03:27.00. She won the entire competition with this event, making it time for the celebration to begin. Gemma Hauck finished third in this event and these 90 points secured her a silver medal overall.

A motivated Peter Ellis who was hungry for a podium finish overall managed to win this event after a very tight race between multiple athletes. He finished only 5 seconds ahead of Zeke Grove, who also finished just 4 seconds ahead of Jay Crouch.

While the 2022 Down Under Championship was also supposed to feature Tia-Clair Toomey competing in the Teams division, she did not end up taking part. Tia-Clair instead enjoyed the show from the stands, as did many other fans.