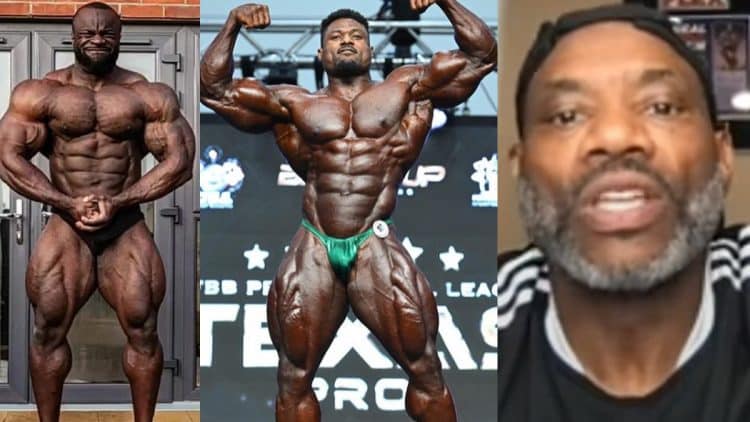 Bodybuilder Dexter Jackson may have retired but his finger has remained on the sport’s pulse. In a recent podcast with Dennis James, Jackson gave his expectations for the 2022 Mr. Olympia contest and specified that Samson Dauda/Andrew Jacked are likely to knock off some serious contenders.

During his respective tenure, Jackson separated himself from his competition with impressive conditioning, separation, and muscle maturity. In 2008, he reached the pinnacle of the sport and won his lone Mr. Olympia title. At 52 years old, Jackson remains in excellent shape and claimed victory at the final installment of the Masters Olympia contest which took place in 2012.

While he no longer competes in the Open class, Jackson’s knowledge and opinions regarding the sport carry a lot of weight. Already, this season is shaping up to be one of the most exciting in years. New blood emerged in the form of Slovakia’s Michal Krizo and Flex Wheeler’s protégé Andrew Jacked. In addition to the aforementioned talent, heavy hitters from last year’s Olympia have no plans of backing down.

As of this writing, 2022 Mr. Olympia is scheduled to take place in less than one month. Athletes are amid preparations as well as the reigning champion Mamdouh ‘Big Ramy’ Elssbiay, who aims to defend his throne and secure a third title. Given how competitive this lineup appears, “The Blade” joined The Menace Podcast to offer some of his 2022 Olympia predictions.

He predicted that Samson Dauda and Andrew Jacked could cause a lot of problems for Brandon as well as other competitors at the show next month.

“Brandon might not be able to duplicate what he did a couple years ago. There’s a few guys that I think can do very well. I think this new kid Samson [Dauda] if he can come in in shape, he can cause a lot of problems. Judging by what he’s come from in just one year, his shape is ridiculous. Then you got the guy that Flex [Wheeler] trains.”

Despite the favorable shape of Curry’s physique, Jackson doesn’t believe the former Mr. Olympia will have the conditioning necessary to hang with the top three.

“Those two guys if they come in shape, it will be very hard for Brandon to beat these guys. You got Nick Walker. He doesn’t have the most beautiful shape but his conditioning… if he’s on like he usually is, he will be right up there as well. Like I said, it’s going to be hard for Brandon to come back like he did a couple years ago,” Dexter Jackson shared.

Bodybuilding coach Milos Sarcev added that Curry could win his second O crown if he could dial in his conditioning 100 percent.

“He [Brandon Curry] was never Dexter Jackson conditioning. Brandon is always in my opinion five pounds off. Always. Not like ‘The Blade,’ who had striations all over the place,” Milos Sarcev said. “If he’s [got] Hadi condition, nobody could touch him.”

Jackson Believes Big Ramy Is Vulnerable to Losing His Title at 2022 Olympia: ‘If These Guys Can Bring It, They Can Beat Big Ramy’

In spite of the hype behind Ramy, courtesy of several physique updates throughout the season, Jackson believes he can be defeated with conditioning.

“He’s already the champion. And two: because no one has brought it. If any of these guys can bring it and conditioning, they can beat Ramy. If Ramy is not in shape, now if Ramy comes in shredded, nobody can beat that but I haven’t seen that Ramy.

Ramy is getting older every year. Everybody is like he looks amazing all season. He should! If he looks this amazing that far out, that’s not good. If he comes in shape and diet, and pulls his water, and things pop like they are supposed to, that’s a totally different story,” Jackson said.

In the final segment, Jackson, Sarcev, James, and Cormier gave their top six predictions for 2022 Olympia.

The last veteran to break down the Men’s Open lineup for 2022 Olympia was four-time winner Jay Cutler. When he spoke with Sarcev last week, Cutler shared his concerns about Hunter Labrada. He believes Labrada needed ‘vast improvements’ this season to overcome his competition. He added that Hunter might struggle with the new physiques of William Bonac, Nick Walker, and Samson Dauda.

This year’s Men’s Open lineup at Olympia is one of the biggest in years. According to Dexter Jackson, unless Ramy comes in shredded, there are a number of contenders ready to take his throne.