Wheels and West pushed each other to exhaustion with an unconventional workout challenge where a total of 100,000 pounds must be lifted in 60 minutes. 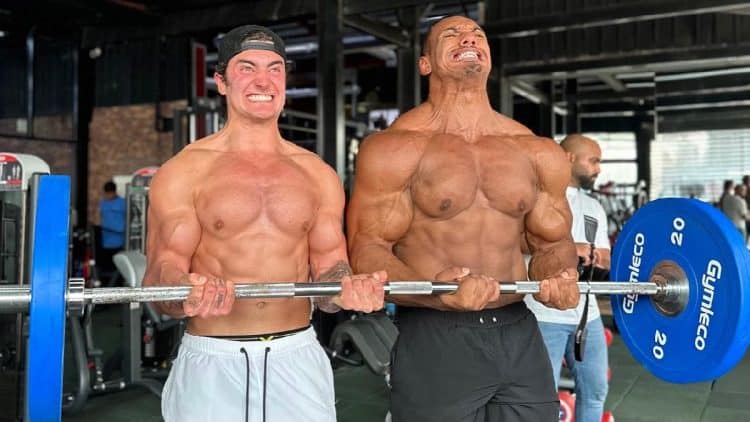 Known for his near-superhuman strength, Larry Wheels has become one of the most popular powerlifters on the planet. In a recent video, Wheels accepted a challenge from influencer Jesse James West to lift a total of 100,000 pounds in a 60-minute window.

In addition to powerlifting, Wheels has carved out career paths in bodybuilding, arm wrestling, and strongman. Although he was slated to compete at the 2022 Middle East’s Strongest Man competition, he was forced to the sidelines as a result of a back injury.

A few months ago, Wheels announced his plan to stop taking all performance-enhancing drugs except testosterone replacement therapy (TRT). It didn’t take long for Wheels to notice bodily changes. He doesn’t believe his mood or strength fluctuated since quitting steroids but specified that many of these compounds made him appear older, especially in the face.

Fans last saw Wheels collaborate with eight-time Mr. Olympia Ronnie Coleman. Many consider Coleman to be one of the strongest athletes to ever come out of bodybuilding. Wheels tested his strength with ‘The King’ by performing squats and leg presses. For his latest workout challenge, Wheels is taking on influencer Jesse James West to see who can lift 100,000 pounds first.

West laid out a few of the rules before they started the challenge. One mile counts as 10,000 pounds toward the 100,000-pound goal.

Jesse James West shared how he wanted to start the challenge.

Wheels began to devise a plan and realized he had a sizeable advantage over Jesse considering his experience lifting heavy weight.

After a few minutes, West continued trying to outsmart Wheels to 100,000 pounds.

They took a brief resting period to strategize how to add more weight to their overall totals. West fired off more reps on the bench while Wheels headed to the squat rack. Looking to close the gap, West searched for a squat rack, but he came up empty-handed. He used a shoulder press rack instead.

Roughly halfway through the video, Wheels was up to 50,000 pounds total and West was trailing behind with around 38,000 pounds. They moved over to the treadmill machines to add 10,000 pounds to their goal with a mile each.

Playing catch up, West went back to the shoulder press. Wheels joined him and revealed his plan to do 10 sets of seven reps. West added that he and Wheels were exhausted after 48 minutes of the 60-minute workout.

With Wheels ahead on the scorecards, West planned to make up for the discrepancy on the leg press machine.

“I need to catch up to Larry I’m so close,” says West.

Known for his uncanny strength, Wheels completed a casual 15 reps of 1,000 pounds. After finishing on the leg press machine, Larry and Jesse were tied with 80,000-pound totals.

“After completely embarrassing myself, it was time for the last challenge. 20,000 pounds each,” West said.

West went back to the bench press and superset with dumbbell curls. Tacking on a few more pounds to his total, Larry also practiced a few dumbbell movements and cable pulldowns. After a pair of barbell curls, Wheels won the challenge by reaching a total of 100,000 pounds.

RELATED: Larry Wheels and Trystin Lee Join Hands In Dubai For A Shredded Back Workout

Whether it’s surviving 50 hours with Liver King, training like Navy Seal David Goggins, or going head-to-head against Larry Wheels, Jesse James West doesn’t shy away from testing himself with some of the biggest names in fitness.

Powerlifter Larry Wheels continues to explore the differences between using performance-enhancing drugs versus just testosterone replacement therapy. In a recent...