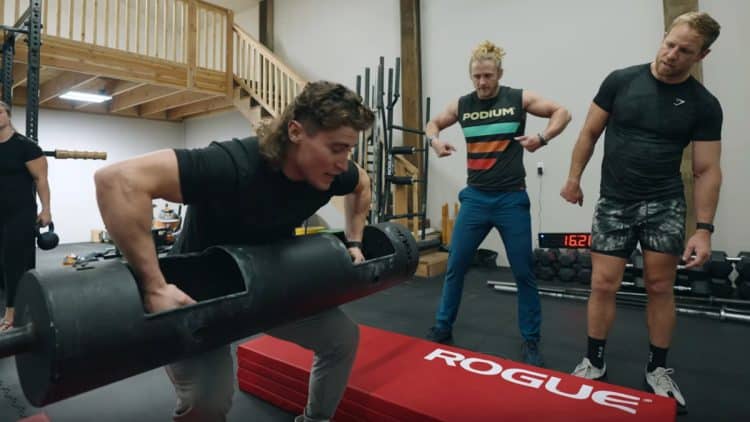 Social media sensation Buttery Bros, the duo of Heber Cannon and Marston Sawyers, have carved out their own space in the fitness industry. They built a reputation for training with the world’s greatest CrossFit athletes, and their most recent video posted on YouTube was no different. The Bros joined forces with CrossFit champion Justin Medeiros to learn how to perform the log lift.

Reigning two-time CrossFit Games champion Justin Medeiros is on track to become one of the greatest CrossFit athletes of all time. In August, he faced intense competition from fellow standouts Roman Khrennikov and Ricky Garard, Medeiros, but they weren’t able to stop him from winning  the 2022 NOBULL CrossFit Games.

While some focus on winning a few events to be successful at the Games, Medeiros proved the importance of being a consistent performer at all events instead of winning some and losing other challenges. Although he did not come out on top of any of the thirteen events, Medeiros managed to defend his title as the Fittest On Earth® in August.

The 23-year-old then made his way to the 2022 Rogue Invitational in Austin, Texas over two weeks ago. He was looking to defend his title after taking home the top prize last year. Chandler Smith and Jeffrey Adler showcased impressive performances in a cutthroat contest that had the top three spots open up until the final event. Medeiros edged out Smith and Adler along with 19 other rivals to become a two-time Rogue invitational champion. One of the events at the Rogue Invitational was the the “Texas Oak”, which featured a one-rep max Log Lift. Justin’s heaviest lift was 270 pounds, but it did not cound because of a time cap breach.

Social media fitness influencers Buttery Bros are renowned for pushing their boundaries with new workouts and diet challenges. The fitness-comedy duo regularly collaborates with other celebrities and athletes. In February, they partnered with Brooke Wells, widely regarded as one of the greatest CrossFit athletes, and her sister Sydney for a training session while Wells recovered from an elbow injury.

In a recent video posted to their YouTube channel, Buttery Bros took the help of Justin Medeiros to get a lesson on performing the log lift exercise properly. The Bros explained that they got inspired to work on the log lift after witnessing the competitors at the Rogue Invitational perform the exercise.

The group met at a restaurant for a pre-workout meal before heading off to Medeiros’ garage gym, called the ‘Shred Shed 2.0.’

“We are going to do this log. Pick it up with straight arms, set it on your legs, and then bend them. You don’t want to pull it into your lap. When it’s light, you can get away with it but when it’s heavy, it’s not. So, straight arms, pick it up and then you lap it and get down. When you go to do this turnover, all the power is coming from your hips. You want to keep your elbows nice and wide so when it rolls over, it’s just going to turn over really easy in that front rack. The higher you get your elbows, the better because when your elbows start dropping, that whole log is going to want to roll off of you. You want to get those handles and elbows high.

“On the dip, all the same principles apply. You want to feel your full foot on the ground and you don’t want to be getting on your toes.

Buttery Bros started with 72 pounds before getting into action with a 160-pound log. They continued increasing the weights, going to 170 pounds on the next set. Medeiros got involved in the exercise as the Bros started lifting 180 pounds.

“You’re getting on your toes when you dip. Fix that, try to do a little bit shorter of a dip. The deeper you are going to go, the more likely you are going to come under your toes. Do that short dip and make sure you’re looking up at the ceiling and then strong front racks.

When Sawyers missed his attempt of lifting 190 pounds, Medeiros guided him against going too low during the dip to maintain the proper technique. Sawyers achieved the lift after the advice while using a lifting belt.

Buttery Bros are expanding its creative footprint in the world of CrossFit. They recently shared a unique recap-style blog of the 2022 NOBULL CrossFit Games. Before Medeiros, the brothers had experience working out with CrossFit Games veteran Noah Ohlsen and five-time Games champion Mat Fraser, with whom they have a supplement company called Podium Nutrition.