Dennis Kohlruss is Germany’s Strongest Man for the second year in a row. 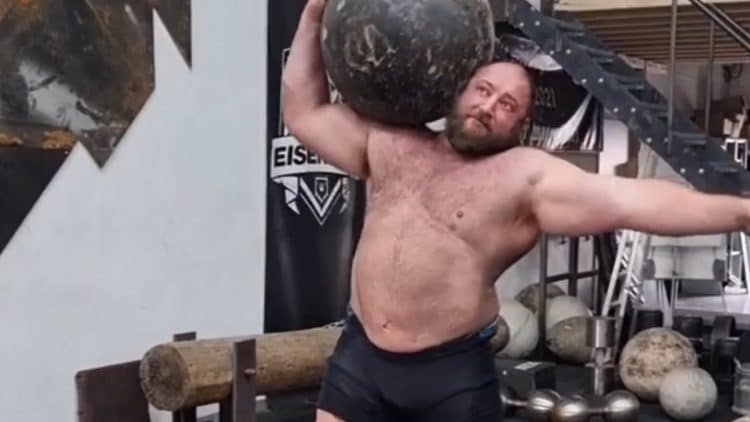 Strongman athletes and fans have had a very busy weekend, but not just because of the 2022 Shaw Classic. Another attraction over the weekend was the 2022 Germany’s Strongest Man contest, which took place at Selgros Cash & Carry in Gera on Aug. 13-14.

Taking part in this year’s Germany’s Strongest Man contest was more important than ever, since the winner would qualify for the 2023 Europe’s Strongest Man contest. Following two days packed with action and eight events, Dennis Kohlruss came out victorious. Dennis also won this competition last year, so he has now successfully defended his title.

*The format of the competition meant that a better placing would earn the competitor fewer points. In turn, the winner was the person who racked up the least amount of points by the end.

Dennis Kohlruss won this event last year and also holds Germany’s log lift records. So, as expected, he also won the max log lift event this year. Dennis locked out a 180-kilogram (397-pound) log, but he was capable of doing more if it was needed.

The second event of the 2022 Germany’s Strongest Man was the deadlift for max, but it involved a car. Seeing that a special platform had to be built, this was far from the standard deadlift. In fact, because of its side handles, this looked more similar to the trap bar deadlift.

The third event of the 2022 Germany’s Strongest Man saw competitors attempt to pull a truck weighing 8,000 kilograms (17,637 pounds) for a length of 20 meters. Dennis Kohlruss and Johannes Eichinger found themselves in a photo finish. However, Dennis once again took the top spot, having beaten Eichinger by just 0.09 seconds.

The fifth event of the 2022 Germany’s Strongest Man was very similar to the truck pull, but the competitors had to pull a tractor this time. The distance remained 20 meters, but the tractor was a bit heavier, weighing in at 8,500 kilograms (18,739 pounds). Placements were very similar to those in the Truck Pull, since Kohlruss came out victorious once again.

The Yoke weighed 400 kilograms (882 pounds), while the track length came out to 20 meters. Kevin Koch turned out to be the quickest with a 15-second run, while Benjamin Blass and Dennis Kohlruss finished in second and third.

The seventh event saw Dennis Kohlruss get crowned as the 2022 Germany’s Strongest Man, since his fifth event win meant that no one could overtake him. Dennis completed six reps of an 87-kilogram (192-pound) overhead dumbbell press. Tim Hruby had an identical performance, so they shared the first place in this event.

Patrick Eibel was the only athlete who loaded all five stones, which weighed from 150 kilograms (330.7 pounds) to 200 kilograms (441 pounds). The winner of the 2022 Germany’s Strongest Man, Dennis Kohlruss, did not load any of the stones, since he had already won the competition and did not want to risk an injury.

In spite of the fact that Germany has many incredible strongmen, Dennis Kohlruss stands out on a whole other level. It will be exciting to watch him against Europe’s greatest athletes soon, as he definitely deserves the chance to do so.