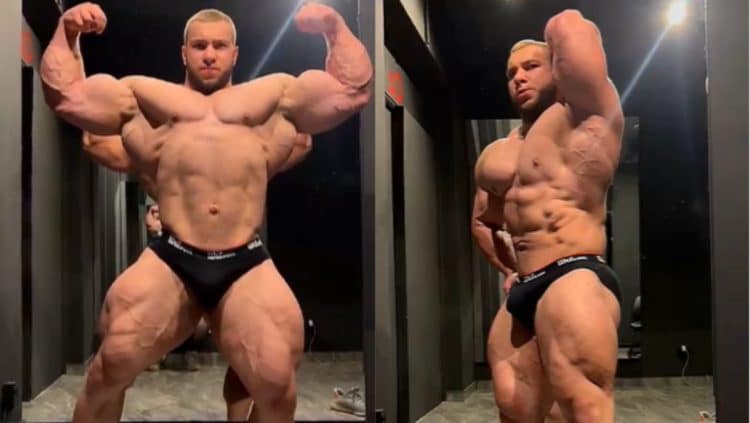 Vitaliy Ugolnikov, well known as “Good Vito” in the bodybuilding community, is ready to make a statement at his next bodybuilding show. In a recent post made to Instagram, Vito showed off a balanced package and revealed his weight of 125 kilograms (275.5 pounds).

Last December, Ugolnikov made the switch from the IFBB Elite Pro League to the NPC. He made the transition with the intention of one day earning his pro card and competing against other high-caliber athletes in the IFBB Pro League. After dominating the Russian bodybuilding circuit, Good Vito insisted that switching leagues was the best move for him at this point in his career.

Vitaliy Ugolnikov isn’t the only IFBB Elite Pro bodybuilder to make the anticipated switch to the NPC. Last month, Slovakian mass monster Michal Krizo started his journey in the NPC as well. His sheer size, even proportions, and enormous arms got the attention of bodybuilding legend Jay Cutler. Despite having yet to earn his pro card, veterans of the sport acknowledge the danger of Krizo’s physique and believe he will be a threat on the Olympia stage this year, should he earn an invitation.

With his focus on the NPC as well, Good Vito is addressing his preparations intensely to produce the best package possible. To facilitate this process, the rising star moved to Brazil earlier this year to continue making improvements. Despite his lack of experience on some of bodybuilding’s biggest stages, his jaw-dropping muscle mass earned him comparisons with 2021 Arnold Classic champion Nick Walker.

On Monday, Good Vito highlighted his spectacular upper body with a promising physique update via Instagram.

“I try to get better every year Discipline is the key to success. All who support me give me energy. I am thankful for you friends! I weigh 125 stone…” Good Vito wrote. (Translated by Instagram)

Vito plans to earn his pro card at a bodybuilding show in September. As it stands, the qualification period for this year’s Mr. Olympia contest runs from September 12, 2021, until November 20, 2022. With that in mind, if Vito can earn his pro card next month, he will have roughly two months to claim victory at a pro show before taking his physique to Mr. Olympia.

Vitaliy’s popularity on social media has only grown as of late. With nearly 300,000 followers on the platform, Vito routinely shares physique updates with fans. Last year, the bodybuilder added a considerable amount of muscle mass to his build. The future looks bright for the rising prospect given his insane arms and impressive v-taper development.

It should be noted that Vito received backlash last year after being accused of photoshopping his pictures. Some people took to Instagram and implied that Good Vito was using heavy filters to look fuller. However, he clapped back at his doubters promptly by posting a thorough video update to refute those claims.

In addition to Krizo and Good Vito, former IFBB Elite Pro athlete Adela Ondrejovicova also switched to the NPC. The Figure bodybuilding standout’s success afforded her the opportunity to compete against other IFBB Pros. She won gold at the 2022 Finland Pro recently and punched her ticket to compete on the Olympia stage later this year.

Given the progress Good Vito has made in a short amount of time, he is one of the most exciting prospects in the sport. With a 275-pound build, Vito is going to be incredibly difficult to stand next to when it’s time to earn his pro card.