Trey Mitchell has won the Shaw Classic for the second consecutive year. 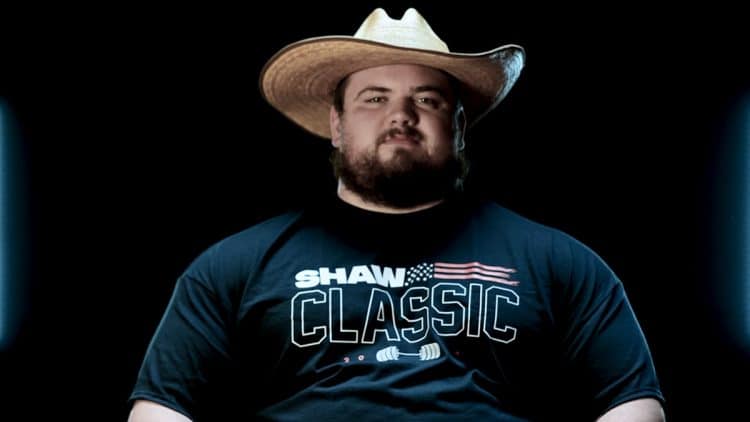 The 2022 Shaw Classic was held on August 13-14, from inside the Budweiser Center in Loveland, Colorado. The competition saw 15 world-class Strongman athletes compete in eight events over two days, including the first showing of the Car Leg Press. This year’s Shaw Classic came down to a very tight finish, as Brian Shaw and Trey Mitchell were tied on points going into the final event. Trey performed better on the Atlas Stones, so he won the 2022 Shaw Classic. Trey Mitchell also won this competition last year, so he is now a 2x consecutive champion.

Apart from a great battle for first place between Brian Shaw and Trey Mitchell, the newcomer from Canada, Mitchell Hooper, managed to grab another podium finish. He managed to outperform many great athletes, which included Oleksii Novikov, who was limited by his bicep injury. However, Oleksii did claim a World Record in the Hummer Tire Deadlift event.

Related: How To Watch The 2022 Shaw Classic

In last year’s edition of the Shaw Classic, we got to see JF Caron break the Hummer Tire Deadlift World Record. In light of this, Brian decided to bring it back for the 2022 Shaw Classic, with the Max Hummer Tire Deadlift kicking off the competition. So, athletes tried to deadlift as much weight as possible and hoped to beat their fellow competitors.

Just like last year, we got to witness a new Hummer Tire Deadlift World Record being set. It was Oleksii Novikov who set the record this time, as he locked out 1,210 pounds.

The second event of the 2022 Shaw Classic was the bag over the bar. So, the competitors thre eight bags ranging from 22 kilograms (48.5 pounds) to 29 kilograms (64 pounds) over a 4.5-meter tall bar in the fastest time possible.

Trey Mitchell, the defending champion, was determined not to relinquish his title, so he turned up and won the second event of the 2022 Shaw Classic. Brian Shaw was the only other man to complete all eight bags, but he was slower than Trey in doing so. Maxime Boudreault made a mistake, so he had to throw one of the bags again. If it wasn’t for that mistake Maxime could have probably gotten an even better score.

The third event of the 2022 Shaw Classic featured a massive yoke, which weighs 506 kilograms (1,115.5 pounds). The task for the competitors was to carry it as quickly as possible down a 20-meter long course. If athletes did not finish this event, their total distance covered counted.

In light of some shoulder problems, Luke Stoltman withdrew prior to this event. However, we also witnessed an incredible outing from the newcomer, Mitchell Hooper, as he carried the yoke, which weighed half a ton, like it was nothing. He won the third event of the 2022 Shaw Classic very convincingly, since the second-place finisher, Konstantine Janashia, trailed him by almost 5 seconds. Oleksii Novikov put up another solid performance to finish in third place.

The fourth event features a circus dumbbell weighing 110 kilograms (242.5 pounds). The athletes will perform as many repetitions as they can, while the time limit for this event is 75 seconds.

As expected, Oleksii Novikov dominated the Circus Dumbbell for reps event. This has always been his greatest event, and this time it was enough for him to tie Trey Mitchell in the first-place of the overall leaderboard. Due to Trey’s second place finish, Oleksii was unable to make up too many points. Hooper, Shaw, and Thompson all got five reps, so they had to share the third-place points.

The Log Lift was the opening event of the 2022 Shaw Classic’s second day. The athletes could choose between a 172-kilogram (379-pound), 186-kilogram (410-pound), or a 200-kilogram (441-pound) log. Therefore, this type of event in Strongman involves performing as many reps as possible with the weight they choose, while one rep with the heavier log beats any number of reps with the lighter log.

The log lift increments turned out to be too heavy for many athletes, so even those who just lifted the lightest log managed to create a massive point difference. Trey Mitchell won the event and made a giant step towards defending his title.

Brian Shaw placed second, having performed the most reps with the 186-kilogram log. Considering Oleksii Novikov and Mitchell Hooper both had identical performances, each of them received 12 points.

The medley event will start off with a 363-kilogram (802.5-pound) frame carry, followed by a 318-kilogram vertical lift. There is not a lot of information available for this event, but Fitness Volt will update the article as soon as possible.

Maxime Boudreault managed to win this event since he was clearly the fastest of all competitors. Evan Singleton was the second fastest, which secured him a lot of points, while Kevin Faires narrowly beat Brian Shaw to finish in third. Bobby Thompson also withdrew before the start of this event.

The Car Leg Press is what makes the 2022 Shaw Classic unique, since it has not been done in any Strongman competition before. As Brian and his team were very excited about this event, they took every measure to ensure that everything was taken care of properly. The car weighs 907 kilograms (2,000 pounds) and competitors are expected to perform as many reps with it as possible in order to complete the challenge.

Brian Shaw gained the victory in this event due to his familiarity with the equipment. Mitchell Hooper completed seven reps to finish behind Brian, while Big Z, the 4x World’s Strongest Man, performed like his old self and placed third.

A total of five implements were used during the Atlas Stone run at the 2022 Shaw Classic, with the weights ranging from 159 kilograms (350.5 pounds) to 204 kilograms (449.5 pounds). It traditionally closes out Strongman competitions, and this was no exception.

Trey Mitchell and Brian Shaw battled it out to find out who would win the 2022 Shaw Classic. In the end, Trey finished loading all the Atlas Stones approximately four seconds faster than Brian. Third-place finisher Mitchell Hooper had his best Atlas Stones performance ever.

The 2022 Shaw Classic featured a stacked lineup, but it was supposed to be even better. However, Tom Stoltman was unable to travel to Colorado, so he withdrew. Another brother, Luke, withdrew because of an injury. In spite of that, we were able to watch some of the best strongmen compete, including Brian Shaw and Zydrunas Savickas. In a close battle with Brian Shaw, Mitchell successfully defended his title from last year.

Exercises to Fix Your Nerd Neck and Desk Slouch

Eddie Hall is widely considered to be one of the best Strongman athletes of all time. His unparalleled tenacity earned...