Oleksii Novikov leaves his mark in the first event of the 2022 Shaw Classic. 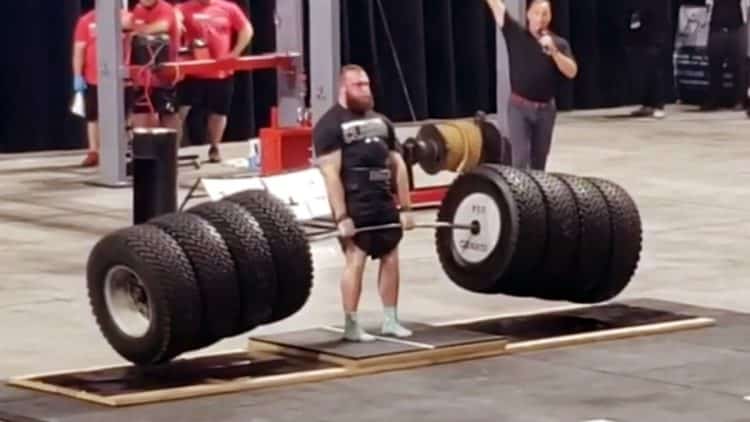 Despite being one of today’s greatest Strongman athletes, many people still question Oleksii Novikov’s deadlifting ability. It is mostly due to his size, as he is much lighter than most Strongmen, that most of them do not expect much from Oleksii. However, he keeps proving he’s great at the deadlift and that his bodyweight is not detrimental for his abilities.

Oleksii Novikov is competing at the 2022 Shaw Classic, which is taking place on Aug. 13-14, 2022, at the Budweiser Center in Loveland, CO. As the first event of this competition was the Max Hummer Tire Deadlift, Oleksii came in fresh and dominated everyone. In addition, he also broke the World Record by locking out 1,210 pounds (549 kilograms).

JF Caron previously held the Hummer Tire Deadlift World Record, which he set in a similar manner at the 2021 Shaw Classic. In fact, Caron’s incredible performance last year convinced Brian Shaw to bring back the same event this year. Now that Oleksii Novikov has broken the record, this could not have gone any better.

This is not the first time that Oleksii Novikov has broken some sort of a deadlift World Record. He has previously also scored the heaviest 18-inch deadlift by pulling 537.5kg (1185lb) at the 2020 World’s Strongest Man Contest. As Oleksii went on to win that competition, it is possible that he will win the 2022 Shaw Classic as well.

Oleksii Novikov still has seven events to perform at the 2022 Shaw Classic, one of which is his specialty. He has notoriously been unbeatable in the Circus Dumbbell for reps and that is the fourth event. So, Oleksii has major chances to come out victorious. Check out the 2022 Shaw Classic Results here.

Despite the incredibly difficult situation in his country, Oleksii Novikov has managed to represent Ukraine brilliantly multiple times this year. Also, he attempted to use the strength and fame that he enjoyed as Strongman to gather funds for some help to his fellow countrymen at the start of the Invasion and even joined the armed forces to defend his country. Considering the circumstances, it’s obvious that Oleksii hasn’t had time to train properly, but his desire and warrior spirit have once again prevailed, resulting in a new World Record.

At the beginning of 2022, Oleksii Novikov shared petitions and tried to help his country and its citizens after they...