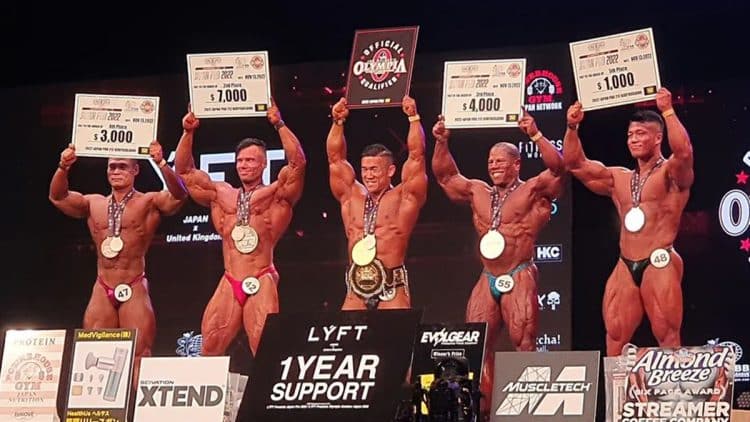 The 2022 Japan Pro is one of the last qualifiers to take place for this year’s Mr. Olympia contest. On November 13, 2022, competitors from the 212 Bodybuilding, Men’s Physique, and Bikini battled on stage in hopes of securing an invitation.

Taking place in Las Vegas, Nevada, the 2022 Mr. Olympia contest will feature the sport’s best bodybuilders. The sporting extravaganza will start on December 15th and run until 18th. Already, several athletes are qualified and slated to compete against each other.

At the Japan Pro this weekend, Sung Yeop Jang, Jinbo Li and Sally-Anne Kato won titles and secured their invitations to compete at the upcoming Olympia contest.

Bodybuilders are running out of time to secure their invitations to the prestigious event. The qualification period for this year’s Olympia show will end on November 20, 2022. Check out which athletes in Tokyo, Japan emerged victorious.

During prejudging, Renyi Xie and Jinbo Li found themselves fighting for the Men’s Physique crown in Tokyo. After a close show, Jinbo Li got his hand raised and earned his ticket to 2022 Olympia.

The Bikini category is one of the most popular and competitive in the IFBB. This show was no different. The Japan Pro results are in the books and Sally-Anne Kato took first place.

Fitness Volt congratulates the three winners on their major victories!