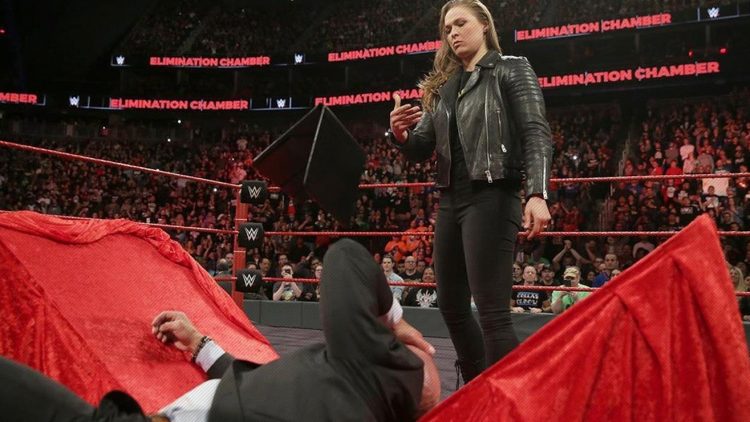 The Ronda Rousey Era Has Begun In WWE

In 2015, Ronda Rousey was trying to figure out her next career move. Okay that’s not entirely true. She was also UFC Women’s Bantamweight Champion and widely regarded as the toughest woman on the planet. But after two losses, first Holly Holm finishes Ronda Rousey with a head kick and in the second match she knocked out by Amanda Nunes in just 48 savage seconds. Rousey stepped away from MMA world to focused on professional wrestling.

WWE’s newest superstar, Rousey’s “contract signing”—held during last night’s Elimination Chamber pay-per-view. That she did—and Triple H made the deal even better by guaranteeing not only a Wrestlemania invite but also a match at WWE’s biggest event.

And as if the excitement weren’t big enough around Rousey, who always seems to raise eyebrows wherever she goes, her WWE hype picked up serious steam.

When Rousey asked Raw General Manager Kurt Angle why he was looking so uneasy, Angle let slip that the hype around her signing was purely manufactured to keep her happy. Angle admitted that Triple H and Stephanie McMahon had planned to keep her placated as revenge for Wrestlemania 31 showdown and that McMahon thought she could “take her.”

Enraged, the UFC Women’s Bantamweight Champion puts her combat skill to work by picking up and slamming Triple H through a table.

Stephanie slapped Rousey, fled the ring, Ronda signed her contract and it looks like we’ll be getting Kurt Angle and Ronda Rousey vs. Triple H and Stephanie at WrestleMania. Not bad.

What will Monday nights hold for Rousey—and for the rest of the WWE grapplers, who will now be forced to contend with a serious competitor in their ranks? It’s hard to say, but we’ll bet that her rivalry with Triple H and McMahon won’t end with a broken signing table.