‘You can’t do it forever’: Michael Bisping retires

Michael Bisping is done fighting. The former UFC middleweight champion has decided against the ‘final fight’ and announced on Monday that he is officially retired, citing an eye issue that has been persistent since losing to Kelvin Gastelum in November 2017.

After losing to Kelvin Gastelum, Bisping wasn’t sure whether he’d fight again. Even months later, he still weighed his options — hanging up his gloves or stepping into the cage at least once more — trying to determine what would be best for his life. But on Monday, Bisping finally announced his retirement from MMA on his podcast, ‘Believe You Me’. Bisping said:

“Obviously, I’ve teased this for a long time now — I might fight again, I might not. Unfortunately, it’s not a fight I’m announcing. I’m going to announce my official retirement from mixed martial arts.”

Michael Bisping won the title in June 2016 against Luke Rockhold and defended it successfully, once against Dan Henderson in November 2016. Bisping said he had considered one last fight, possibly against Rashad Evans in London.

“That never happened — probably a good thing,” he said.

Bisping, 39 hasn’t fought since his first-round knockout to Gastelum, which followed a title loss to Georges St-Pierre just weeks before at UFC 217. And, unless anything changes in the future, the Gastelum fight will go down as “The Count’s” last.

Bisping revealed after the Gastelum fight he started having the issues with his good eye (one of his eyes was permanently injured in a 2013 UFC bout against Belfort). That’s one of the reasons he’s stepping away now, not later, Bisping said:

“After the Gastelum fight, I went to a party with all my team, friends, etc. We went to a club, and because it was dark, I kept seeing this flash out of the corner of my good eye. I’m like, ‘What the hell?’ and I keep looking. Then I realize there’s no flash going on; it’s just my eye. Every time I look left, it flashes — and it still does it now when it’s dark.”

“I was kind of freaking out. First thing I did when I get home, I went to a doctor. They checked it out, and they said it probably was a detached retina. They looked at it and said, ‘No, it’s not a detached retina, it’s a vitreous detachment’.” 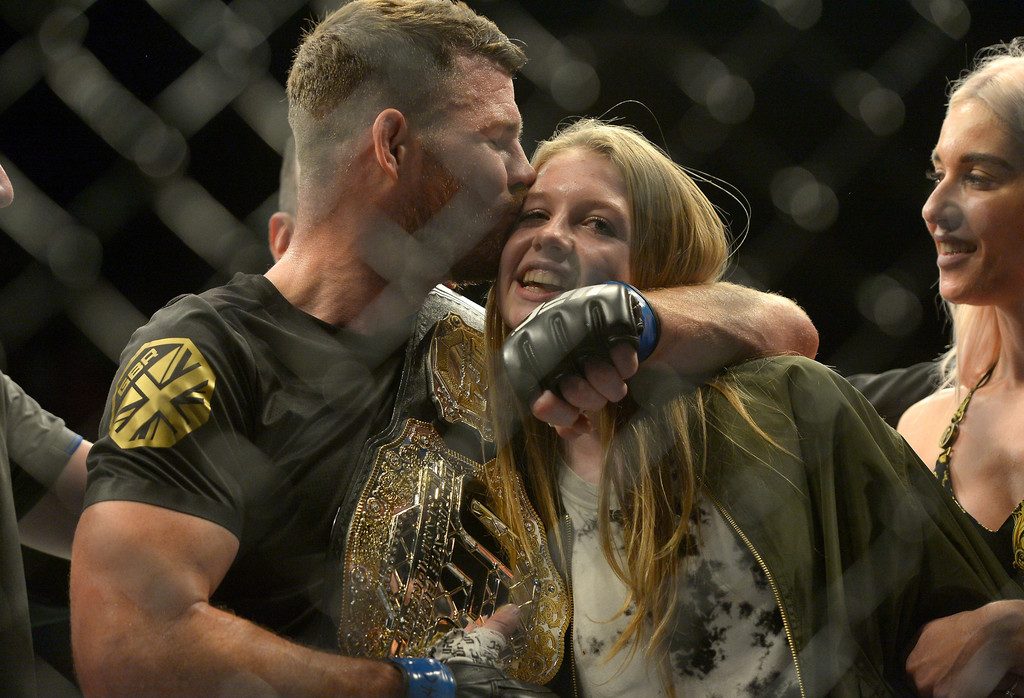 Michael Bisping has impressive numbers over his 14-year MMA career. He has compiled a 30-9 overall record and a 20-9 mark in his 11 years with the UFC. His 29 fights are the most in UFC history, and his 20 wins tie him with St-Pierre and Donald Cerrone for the most in the promotion’s history. Bisping said of continuing in the Octagon:

“What else am I gonna do? I won the belt, I’ve had tons of wins, I’ve done everything that I set out to do. Fortunately now, I’ve used my platform to open other doors.”

The MMA world reacted to the news on Twitter shortly afterward:

Congrats to @bisping on his retirement ! He has accomplished so much in this sport and is def a future hall of famer! Unfortunately we never had the opportunity to fight in the octagon but it was a pleasure just to trash talk back and forth a few times ! Future is bright. Enjoy!

My guy @bisping is getting out of the game. Congrats on a great career my man. You earned it! You made people care one way or the other and you won and won a lot. That’s what matters man. Congrats my man! DC pic.twitter.com/sD1rwNtz20

Congrats on your amazing journey @bisping was a pleasure to train and help you a bit on this journey. Much respect

Enjoy retirement @bisping you had an amazing career and always enjoyed our time sharing the spot light together!! #thecount pic.twitter.com/lCZguoeQo3

Congrats @bisping on a amazing career ! Enjoy your retirement bud !

I knew the time was drawing near; but hearing that my @UFCONFOX partner in crime @bisping has officially retired is still bittersweet. Happy I won't be panicking while he fights, but sad I won't have the opportunity again. Congrats Mike! See you on set, and in the HOF! 👏🏽😘🙌🏽

Breaking News! Michael Bisping has officially announced his retirement! Catch the count talking about hanging up the gloves in this clip. https://t.co/9wcbJEHAk6 or head to https://t.co/3zQRzcpafC and use promo code BYM for a free trial to watch the full episode in HD!!!

Thank you @bisping for all of the memorable moments. Bisping fought anyone anytime anywhere and he’ll go down in history as a true hall of famer. God bless you and your family my friend

Congratulations @bisping you fought them all and you proved your mettle time and time again. TUF Champ, most wins in ufc history, most fights in ufc history, @ufc middleweight champ. 👏 Time to enjoy your life even more. You earned it!

Congrats to the legend @bisping on an outstanding UFC career! No man did more for MMA's growth in the UK and it was only fitting he was England's first undisputed UFC champion. Thankful to have had the chance to watch and call his fights. Next stop: Hall of Fame. #thanksMike https://t.co/QNFtPQ2LKu

This. What a career. Fights and Pressers we’ll never forget. Always fun to be around. We love ya @bisping! https://t.co/9g5mmYY3rY

Congrats @bisping on an amazing career and display of perseverance and no quit attitude. To become world champ after all the ups and downs was legendary and an inspiration. Thank you for all the amazing fights

Bisping’s most impressive winning streak came late in his career, from April 2015 to October 2016, and included wins over Rockhold and middleweight great Anderson Silva.

Bodybuilder Ben Chow emerged onto the scene in 2020 and made a lasting impression on the sport despite only performing...