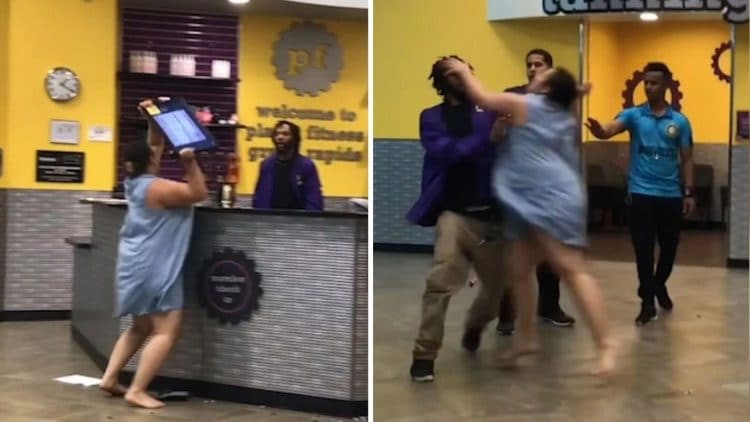 A woman arrested after destructive rage at Planet Fitness

A 20-year old woman was arrested at a Planet Fitness in Grand Rapids, Michigan on Tuesday morning after assaulting an employee, and destroying equipment at the gym

Alexia Delange caught the rampage in two cell phone videos and posted them on Facebook.

“I’ll kill you,” the woman said in the midst of throwing computer monitors, damaging a phone and arguing with and cursing at employees. Grand Rapids Police say she is being charged with Malicious Destruction of Property, $200 – $1,000. Fox 17 reported.

She also hit and kicked one worker several times. The woman also fell to the floor at one point when she missed a punch.

Check out the following videos of pure rage:

Here is another video clip:

The front-desk employee decided not to press charges over the assault. The gym, however, pressed charges for the destroyed property.

As various businesses around the country begin reopening, people have been wondering when their local gyms will open their doors...

Well, well, well....if it isn't the unwanted stepchild of the fitness industry, Planet Fitness. The popular, but controversial, chain of...