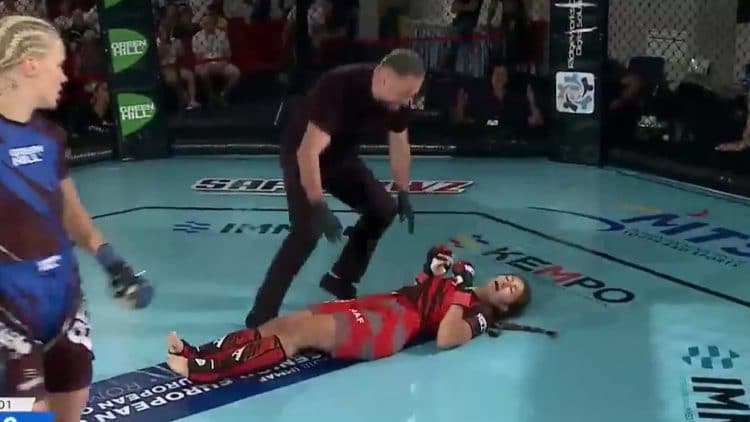 Jenni Kivioja’s Most Violent Shin To The Chin!

The IMMAF (International Mixed Martial Arts Federation) just held its 2018 European Championships in Bucharest, Romania over the week and the amateur tournament event featured one of the meanest, most violent head kick knock out in the history of Women’s Mixed Martial Arts since Holly Holm dethroned Ronda Rousey.

Jenni Kivioja the new queen of the octagon caught Sweden’s Jessica Forslund Reis with the ‘good night’ head kick at 2:38 of the first round in their women’s featherweight fight.

The 30-year old Jenni pulled off an earth-shattering head kick against Forslund Reis in her first fight at this tournament. She’d go on to beat Italy’s Fabiana Giampa in the semis before losing in the finals fight via decision to Germany’s Julia Dorney. That earned Jennie Kivioja a silver medal, but her head kick KO is the highlight that will live on forever.

She definitely has the potential to become new Holly Holm or Paige Van Zant if she maintains this pace in the future.