Schwarzenegger: Don’t go back in time to “rescue the coal industry.”

Just when we thought the beef between GOAT bodybuilder Arnold Schwarzenegger and President Donald Trump was a thing of the past, the former California Gov. goes right back on the offensive. Schwarzenegger scolded a bobblehead figurine of President Trump on climate change in a new video by media company “ATTN”

“Why the hell are you going through all this effort to rescue coal?” he asked.

Schwarzenegger compares Trump’s attempt to “rescue the coal industry” to rescuing other relics from America’s past.

“It is foolish to bring back laughable, outdated technology to suit your political agenda,” Schwarzenegger says. “I mean, what are you going to bring back next? Floppy disks? Fax machines? Beanie Babies? Beepers? Or Blockbuster? Think about it. What if you tried to save Blockbuster?”

Arnold is no stranger to playing mind games and did it well during his Olympia competition days. The post below shows Arnold Schwarzenegger roasting President Trump in a hilarious, sarcastic and informative manner:

Arnold Schwarzenegger Has a Message for Trump

Donald Trump needs to stop trying to save an industry that is poisoning the environment. — Arnold Schwarzenegger.

As an immigrant, I know the magnetic power of America's greatness. As a former border Governor, I know the importance of securing our border and fixing our absurdly broken immigration system. As an American, I know that kids shouldn't be pawns while the "adults" figure it out.

Now, when the Schwarzenegger shared the video on his Facebook page, one commenter decided he felt brave dubbed him a “Snowflake” for his criticisms of President Trump, he wrote:

“Stick to lifting and making movies…Snowflake is a title you do not want.”

This was a bad move, our tragic commenter made a simple mistake: if you come at Arnold, definitely avoid any topics that have to do with winter.

Schwarzenegger took the time to respond to the comment personally, channeled “Batman and Robin” villain Mr. Freeze to school a Facebook troll: 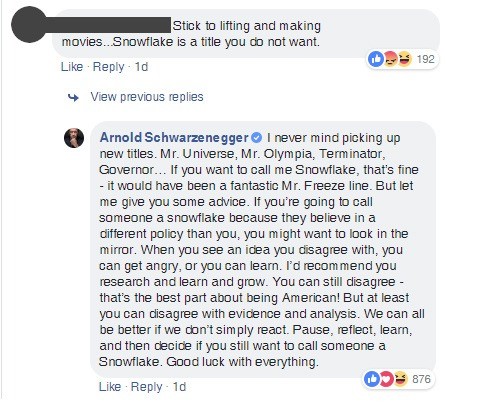 “I never mind picking up new titles. Mr. Universe, Mr. Olympia, Terminator, Governor.. If you want to call me a Snowflake, that’s fine — it would have been fantastic Mr. Freeze line. But let me give you some advice,” Schwarzenegger replied.

The former governor went on to write:

“If you’re going to call someone a snowflake because they believe in different policy than you, you might want to look in the mirror. When you see an idea you disagree with, you can get angry, or you can learn,”

“I’d recommend you research and learn and grow. You can still disagree — that’s the best part about being American! But at least you can disagree with evidence and analysis. We can all be better if we don’t simply react. Pause, reflect, learn, and then decide if you still want to call someone a Snowflake. Good luck with everything.”

Schwarzenegger played villain Mr. Freeze in the 1997 American superhero film “Batman and Robin.” As Mr. Freeze, Schwarzenegger wasn’t just large and in charge — he fired off some of the greatest cold weather puns ever uttered on film.

Road To Olympia 2018: Roelly Winklaar And Flex Lewis Are Looking Inhuman And Jacked