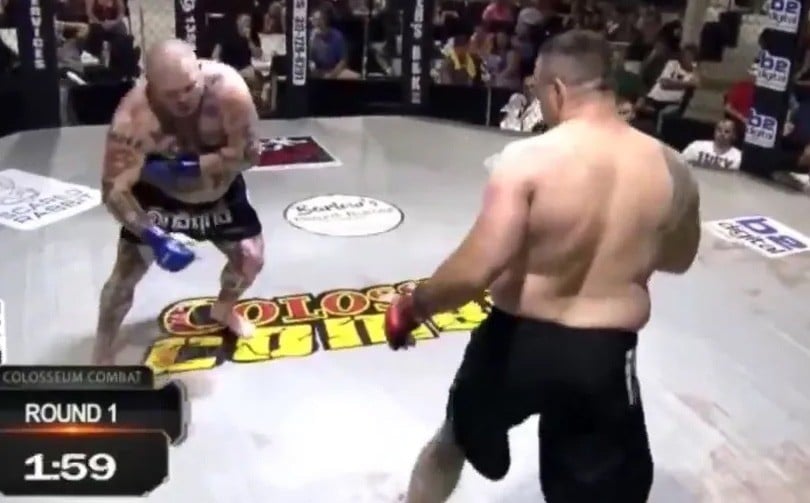 Both fighters came into the match with many bouts under their considerable belts, you’d think fight number 396 would be a typical affair, but it certainly was not.

So to recap.. Johnathan Ivey fakes a heart attack, drops Travis Fulton, proceeds to follow up with GNP… then decides he can't punch his idol in the face anymore and taps out. #mmathings pic.twitter.com/grK54YhOe0

In the first round, things got weird when Jonathan Ivey keeled over and grabbed the right side of his chest to faked a heart attack and then sucker punched Travis Fulton, knocking him to the canvas where Jonathan opened up with what could have been fight-ending ground and pound… Faking a heart attack would have been weird enough… Right? But after about 30 seconds, Ivey figured out how to make things even stranger, he stopped his attack, stepped back and decided to tap out ending the fight.

Apparently, Ivey is actually a huge Fulton fan and has a tattoo of Travis on his leg. He decided to tap out rather than knock out one of his heroes.

I always thought Ivo Cuk was the patron saint of MMA tats but it's actually Johnathan Ivey pic.twitter.com/HTBoWBl14n

I'm so confused. Johnathan Ivey was just in the process of a TKO and then inexplicably quit

Well, that was not entirely surprising, Ivey is known for being a bit eccentric in the cage.

In a fight against the legendary Ken Shamrock, Ivey deployed somersaults for no apparent reason.

"The Ironman" Travis Fulton (255-54-10, 1 NC) about to fight THE Johnathan Ivey right now. Yes, that Jonathan Ivey. This should be bad and hilarious. https://t.co/c45sruskNB pic.twitter.com/ufkLXucx2s

And in another bout, he tried to use the crane kick from “Karate Kid” only to be knocked out cold.

That was just another night in the strange weird world of MMA!