Tip: Viagra is Good for Bodybuilders!

A few days ago, while doing my daily youtube fueled procrastination routine, I stumbled upon a very interesting video. The video in question was citing a 2013 research that claimed that taking dick pills might help muscle growth. They had both my curiosity and my attention. So, was it really the case? Can taking viagra really help you get mad gainz as well as a raging boner?

Well, kinda…sorta. First thing’s first, let us all take a moment to watch the video in question.

Ok, so the problem that comes to attention is that it’s a very small study. Only 11 participants were used and of those 11, five guys were given boner magic pills and the other six was given some kind of placebo. The second; is even though the study claims dong medicine works almost as good as taking testosterone, at best they last a few hours. After which, if you are still left with a raging harpoon between your legs ready to strike at any fish that crosses your path, you need to see a doctor. Testosterone has a much more lasting effect and the only reason to see a doctor about it is that you got sick gainz. The video goes a bit in depth here about the research and its some pretty cool stuff.

Moving away a bit from the video, intrigued by this subject, I did some research of my own. Turns out that dick pills and performance enhancements have a long standing history together. There is a 2004 study where mountain climbers took sildenafil citrate (the main ingredient of Viagra) and they got “improved arterial oxygen saturation and boosted maximum workload by an average of 22 percent”.

More oxygen in your blood means muscles work better and get less tired. Which in itself means you get better sports results, and in this study, the results were 22% better! That’s a solid performance boost, and they got it, from nothing more than just some common dick pills.

You’re probably chalking all this up to good ol’ fashioned placebo effect or individuals having unique results. I mean, it’s dick pills, damn it! You get hard and your significant other falls victim to an attack with a chemically enhanced weapon.

The pills then eventually wear off and The Hulk becomes Bruce Banner once more. Well, turns out you can get more than one use out of your schlong raising tablets. In 2006, a study took a group of high altitude cyclists and gave them Viagra. Cyclists showed improvement up to 45% in their performance!

Here’s some more food for thought, former UFC light-heavyweight champion Jon Jones was supposed to fight Daniel Cormier at UFC 200. However, Jon tested positive for a banned substance on fight night and was suspended from fighting. What was his defense for failing a doping test? His defense was, drumroll please, tainted dick pills.

Jones was acquitted of using performance enhancers, and his hilarious “the dog ate my homework” story actually checked out and he was eventually cleared to fight again . However, let’s take a look at this story in light of everything I wrote above. In various studies, made by independent researchers, with different sports, viagra-like pills can and do increase your body’s performance under muscular stress.

Jon Jones is an elite MMA fighter, considered one of the best ever, with a nearly perfect fight score. He openly admitted to using sex pills in the past. Jon Jones fights out of Albuquerque, New Mexico which is at an altitude of 5,700 feet. Altitude high enough, people can get altitude sickness there. Which is of value here, when you remember the two studies I cited a bit earlier claiming dick pills showed performance enhancing qualities when taken during high altitude performances.

Now let’s put our tinfoil-anti-mind-reading-conspiracy hats down and go back to the burning question. Do viagra and other viagra-like pills help in getting bigger muscles? Well, the answer is not that simple. The cyclists and the mountain climbers in the research above all did high altitude, high endurance sports. When you get to those hights the air gets thinner and it’s harder to breathe and to perform any kind of physical activity. That’s why you see climbers take oxygen tanks when going to Everest and such peaks.

That’s why taking something that loosens up the blood vessels and allows more blood to flow would have a performance-enhancing effect. The major problem here is that the effect of dick pills varies from person to person. You can get a nice pump(and probably a decent sized hard-on) if you take a good enough dosage. And, yeah that could mean bigger pump=bigger blood flow, bigger blood flow=bigger nutrient flow to the muscles, bugger nutrient flow=better gainz. However, its effects are only for long-time users.

The research that proves boner medicine can give you a nice pump and a quality muscle mass are optimistic. So optimistic that it might even find itself on a banned substance list in the future. However, it’s still very much inconclusive and not worth being branded as the weird dude that does bench presses with a firmly pitched tent.

Also, if you are one of those pump chasing maniacs that wants that extra edge, try taking some nitric oxide. It’s perfectly legal and supplement companies regularly include it among the ingredients of their pre-workouts.

After Successful Surgery, Dennis James Is In Rehab Training 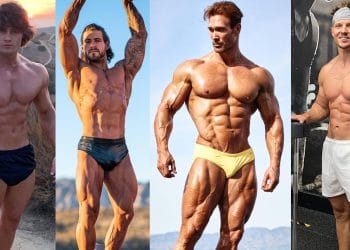 If you were to make a list of the best natural bodybuilders today, we are certain that your overall five favorite bodybuilders...