The total cash prizes for all the divisions shoot up

Since 1965, when the great Joe Weider started Mr. Olympia total 13 men won the competition and etched their names into the tome of bodybuilding immortality. Larry Scott won the inaugural event in 1965 and walked away with the cash prize of  $1,000. According to the CPI Inflation Calculator, $1,000 in 1965 has the equivalent purchasing power as $7,961.65 in 2018.

Today Amercian Media, Inc published a press release revealing the bodybuilding sports biggest purse to make and female competitors. According to the press release by the AMI total $1.36 million will be awarded to the athletes.

American Media Inc. (AMI) today announced that the prize money for the 2018 Joe Weider’s Olympia Fitness & Performance Weekend contests will once again be the biggest in the sport’s history with $1.36 million being awarded to male and female competitors. In addition to being the richest award for the male professionals taking the stage, this year’s event will also be the biggest-ever payout for female competitors as well.

“The 2018 Joe Weider’s Olympia Fitness & Performance Weekend will once again be the biggest and best event in the sport’s history,” said AMI Chairman and CEO David J. Pecker.

“Our commitment to growing the sport, and the industry, is underscored by maintaining the biggest prize money available to both male and female professionals, ensuring that the best physiques in the world will take the stage at Orleans Arena

The exact breakdown of prize money per division is not mentioned in the press release.

Check out the official press release: 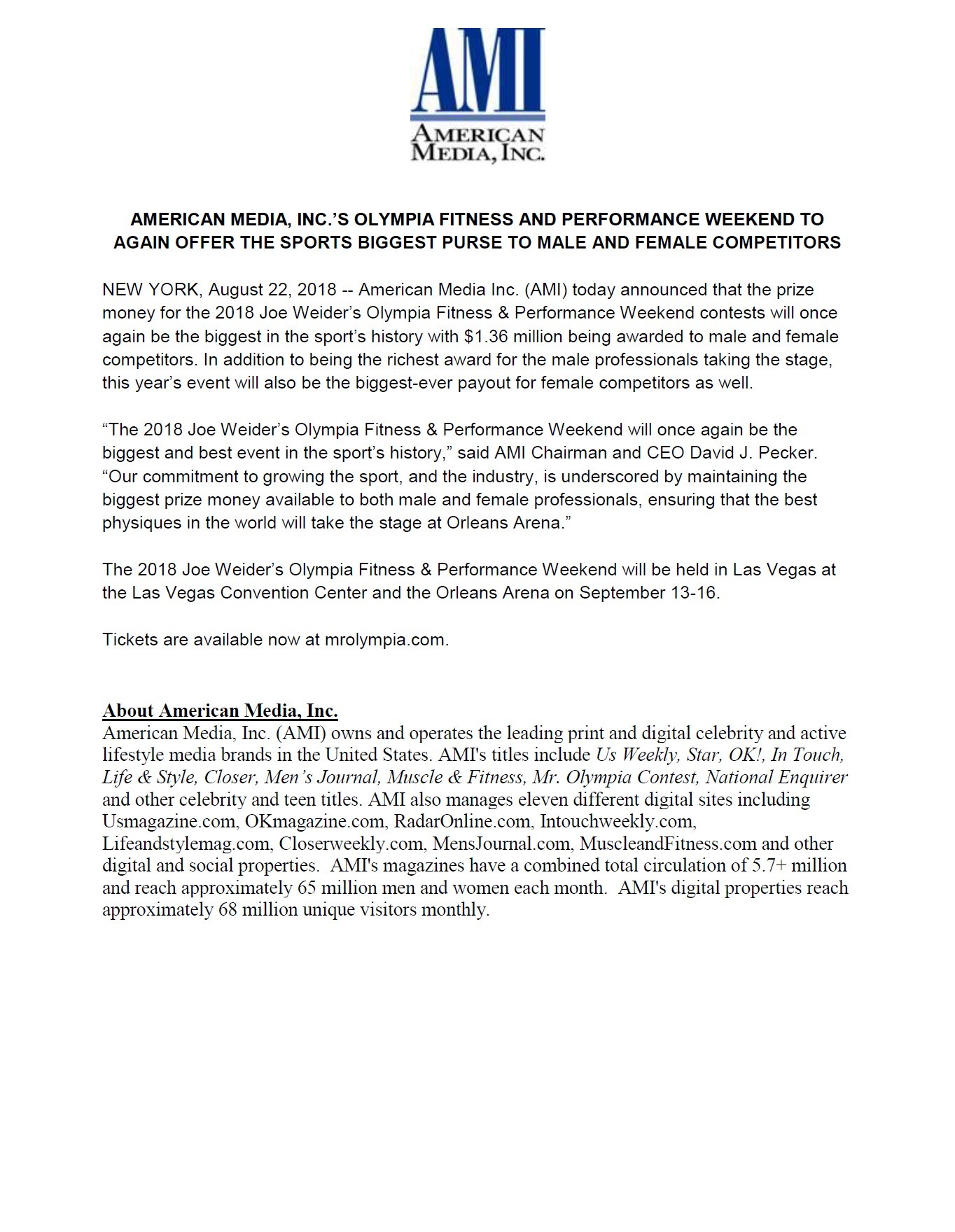 The 2018 Olympia Fitness & Performance Weekend will be held in Las Vegas at the Las Vegas Convention Center and the Orleans Arena on September 13-16. Here you can check the complete schedule of 2018 Mr. Olympia!

The 2018 Mr. Olympia champion Shawn Rhoden hints at the possibility of hitting a vacuum pose at the 2019 Mr. Olympia....

Has Big Ramy made the right decision to leave Oxygen Gym and train with Neil Hill? Opportunity may be slowly...

Phil Heath’s Back Pose Is Not Enough for New Era of Bodybuilding The debate about why Shawn Rhoden defeated Phil...

Shawn Ray: Phil Heath knows why he lost the show, everything after that is just smoke and mirrors! Hall of fame bodybuilder...

Jay Cutler: I am excited about bodybuilding again! The 4x Mr. Olympia Jay Cutler was one of the best bodybuilders...