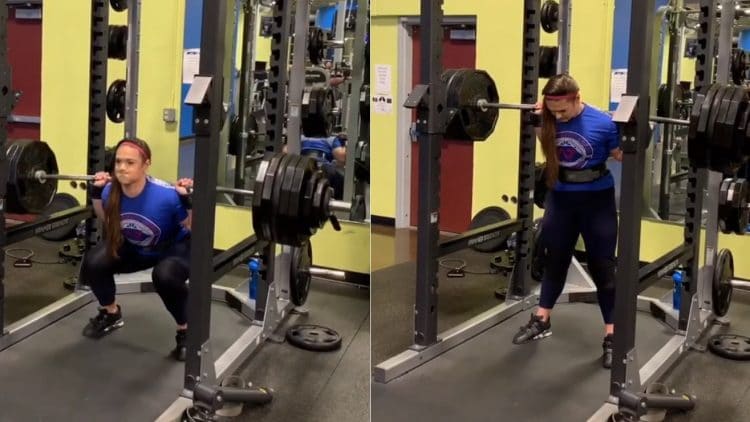 Holy Moly… Amanda Lawrence is one mighty woman (And a young one at that). The 21-year-old who has set several world records at USAPL Nationals in the squat and deadlift has set a personal squat record of 570 pounds.

She posted her newest feat of strength on Instagram, and what’s super impressive is that she did it at 84kg/185lbs…

Yikes… most full-grown men couldn’t handle half the weight Lawrence squatted for a personal record. At such a young age her potential is limitless and it’s quite scary!

She posted the following after she set a new PR…

In June of 2018, Amanda Lawrence completed a squat of 496 pounds which is crazy, and then she went on to compete for a 526-pound squat in October of 2018 (Even crazier) which set an unofficial World Record.

So now you can imagine just how unbelievable it is that she completed a 570-pound squat most recently as seen in the video. To add 74 pounds to a squat in such a short amount of time (Seven months) is as good as it gets.

We could probably be optimistic about early next year when Lawrence competes in the Arnold USA Powerlifting Championships at the end of February. There’s no doubt she will perform well (That’s what she does).

Could a 600-pound squat be in the near future? At the rate she’s progressing, it seems extremely likely.