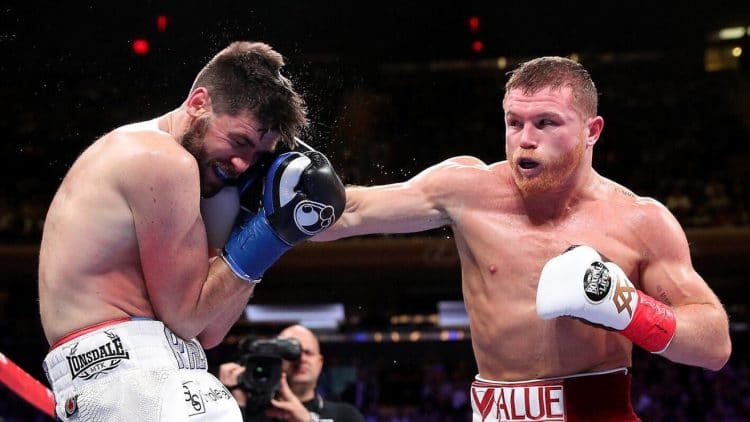 Canelo Alvarez puts on an impressive performance with his debut on DAZN which went down last night (Dec. 15, 2018) from inside Madison Square Garden New York.

Alvarez dropped Liverpool’s Rocky Fielding four times in a little over eight minutes. Mexican star landed significant left hooks to the body and started to rack up the takedowns. By the third round, Canelo dropped Fielding with a body shot to the mat, this time referee stepped in and waved off the fight. Despite Alvarez moved up in the weight class, this fight was one of the biggest mismatches we’ve seen this year.

With this win, Canelo extended his record to (51-1-2) and scores another title in what is now his third division.

"I felt that it ended on September 15 and I showed that I was best, but they were two great fights that's no secret, and if the people want it, we can make it"

Rocky Fielding essentially donated his world title to Canelo today. You’ll never see a happier person to have just lost a world title. He’d accepted his fate a long time ago. Oh well, collect that check and be on your way. #CaneloRocky

I probably gave Fielding too much credit. He has absolutely nothing to keep Canelo off https://t.co/lWnIfGxQvf

Fielding is definitely tough and he at least entertained me in getting his ass kicked.

Lots of talk from DAZN broadcast about Canelo at 168, but this was a one-off for now. Canelo will return May 4 to defend @ringmagazine middleweight championship. Matchup at 168 with Callum Smith intriguing down the line #CaneloFielding

Rocky Fielding looked at his corner like, “would you PLEASE stop this?”#canelovsrocky #canelo