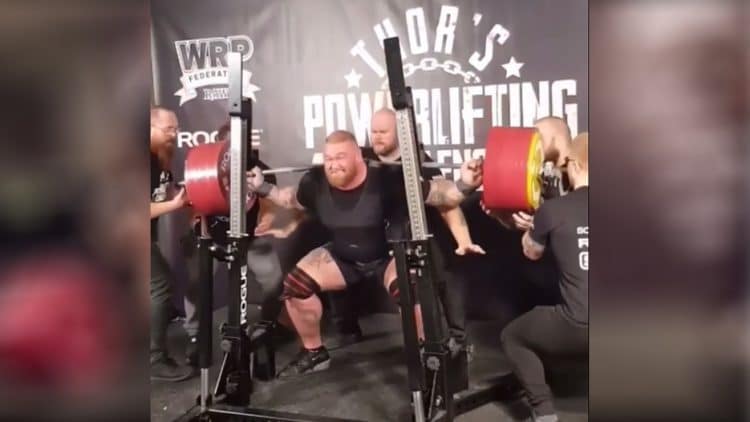 The ‘Mountain’ was nothing short of impressive!

Hafthor Bjornsson showed up “big time” this past weekend, at Thor’s Powerlifting Challenge during the Iceland Open expo in Laugardalshöll, Reykjavík, Iceland. The Game of Thrones actor and 2018 World’s Strongest Man champion; put up numbers we’d expect from him (Or did we)?

Bjornsson announced he’d be competing in Thor’s Powerlifting Challenge in November, and the speculations began about whether he’d meet/exceed expectations. Well, we can say one thing… he was impressive as usual but a record total? Not this time around.

Andrey Malanichev will still hold the all-time Superheavyweight total record but it doesn’t mean Hafthor Bjornsson cannot surpass him in the near future.

So, you’re probably wondering how the meet went?…

Let’s start with Bjornsson’s performance in the squat. After an effortless first attempt, he moved on to 440kg/970 pounds which were no big deal. Then he went on to attempt a final squat of 460kg/1,014 lbs and after 2/3 red lights, the lift was no good.

Watch the squat attempt below:

On to the next lift being the bench press, many were uncertain as to how Bjornsson would perform seeing as the bench press is not an official strongman lift during competition.

Finally, we get to the deadlift where Bjornsson breezed through 390kg/859 lbs, before a second and successful attempt of 410kg/903 lbs.

Will we eventually see Hafthor Bjornsson at the top of the Super Heavyweight total rankings? It’s safe to say that if he stays injury-free and improves his lifts even further, it almost seems like a sure thing!

However, we cannot be too certain of his future in powerlifting at the present moment as nothing is ever guaranteed.