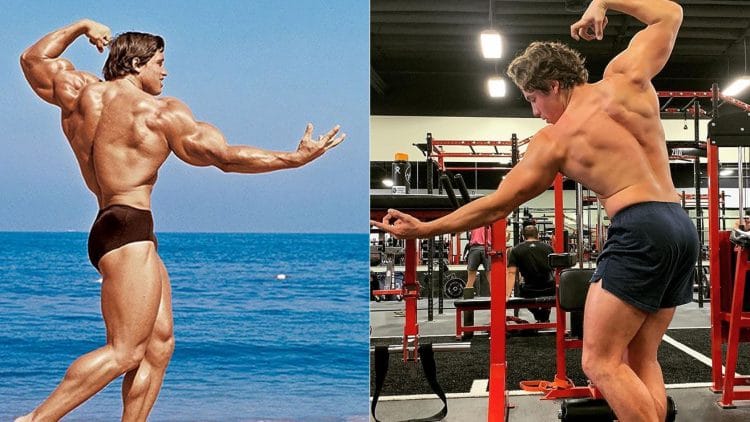 Joseph Baena is getting ready to grace the stage like his seven-time Mr. Olympia father Arnold Schwarzenegger, and the kid’s got some potential! Baena, 21, is very fortunate to have his father’s genetics and he’s putting in the hard work to bring out his best physique to compete as a natural bodybuilder (For now at least).

It’s interesting to know that Baena is Schwarzenegger’s first child to pursue bodybuilding. Now, following in his father’s footsteps is a pretty far-fetched dream but don’t count him out just yet as anything is possible.

Baena has a lot of similarities to his father but there may be some differences too. Arnold Schwarzenegger was known for his unique posing. So it’s normal to think that Baena would benefit from the same poses since he has a lot of his father’s shape.

However, it’s still too early to tell and although Baena has great genetics, he still needs to develop more size along with better conditioning, and then we will be able to make a fair assessment. His twisted back double bicep pose appears similar to his father’s, from the legs to the traps, plus the back and arms (Who wouldn’t want to look like Arnold?).

Schwarzenegger was known for his great upper body and aside from his chest development; his biceps were some of the best the sport has ever seen. Baena’s biceps look similar in length and his muscle fullness is very similar to his father’s as well but Schwarzenegger’s biceps were a product of years of intense training and dieting.

Here’s a video of Baena doing a front double bicep. Can you tell if his biceps will be as good as his father’s someday?

He’s looking pretty, especially the arms and legs! His biceps do appear as if they could one day be just like Arnold’s but again time will tell and there are many factors to consider. Schwarzenegger was not natural… Now if Baena stays natural, he probably won’t have the same impact physique-wise but his development is pretty impressive and will only get better.

Here’s a video where Baena resembles his father a little better.

Does this remind you of the scene in Pumping Iron where Schwarzenegger was doing cable chest flyes with memorable facial expressions? Yeah… it reminds us too! Baena has got the facial expressions down (He’s not mimicking this part) and his physique is very reminiscent of a young Arnold.

Let’s give this one some time before we jump to conclusions but it’s still pretty cool to think we may see Joseph Baena carrying on the legacy of his iconic father left behind.

We wish Baena all the best in his bodybuilding endeavors and we hope to see more of him in the near future.

IFBB Pro Jason Huh Calls It Quits: “Pro-Bodybuilding Is Not All It’s Cracked Up To Be”