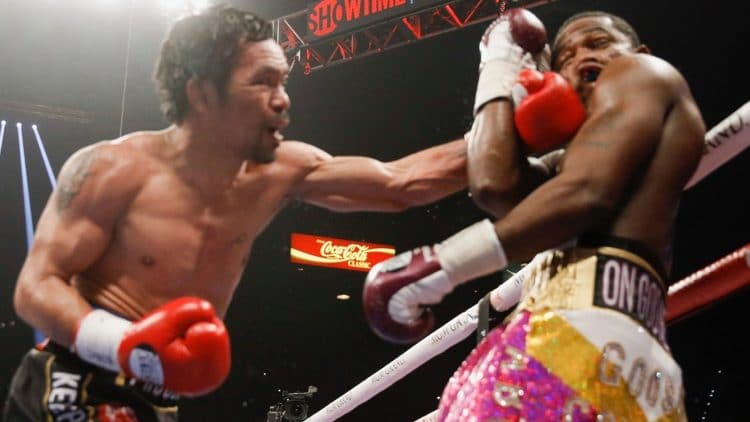 Manny Pacquiao opened up strong. He showed fabulous hand speed and dominated his rival on the beginning of the match. During the first three rounds, “The Pacman” moved like a cat, and his superb skills were an enigma for Adrien Broner. He was trapping Broner and delivering brutal combos against the ropes.

During the fourth and fifth round, “The Problem” recovered, and his distance was better. But that was it. In the later rounds, Pacquaio was better, his punches were faster and more precise. “The Problem” was rocked once but he miraculously recovered.

We saw a funny detail in the ninth round, when Broner went for a “single-leg takedown attempt”.

Overall, Manny Pacquiao landed more clean shots, especially to the rival’s mid-section, while Adrien Broner’s punch accuracy was terrible. Broner was unable to use counters to his advantage. Manny’s ducking skills were superb. The fight ended in a dominant win for the legendary Asian boxer.

Check out some highlights below:

Manny Pacquiao improved his fabulous score to 61-7-2, while Broner dropped to 33-4-1. “The Pacman,” said in the post-fight interview that he wanted to continue fighting. But there is one big question at the moment. Who will be Pacquiao’s next rival?

There were talks of Manny Pacquiao Vs Floyd Mayweather 2, and many believe this match might happen during 2019. The Asian boxing legend stated he was ready to accept that match if Mayweather is ready to get back. But Mayweather, unfortunately, refused to answer this question.

In the post-fight interview, Adrien Broner said he thought he was the winner of the match.

What are your thoughts on this fight? Can you predict the next rival for Filipino legend?

The eight-division world boxing champion Manny Pacquiao has been adamant about making a fight with Conor McGregor happen. The Filipino...

Floyd Mayweather Jr. finished Conor McGregor by TKO in the tenth round of McGregor's professional boxing debut, but that hasn't...

Conor McGregor defied many expectations by taking Floyd Mayweather to the 10th round and some stunning punch statistics reveal just...