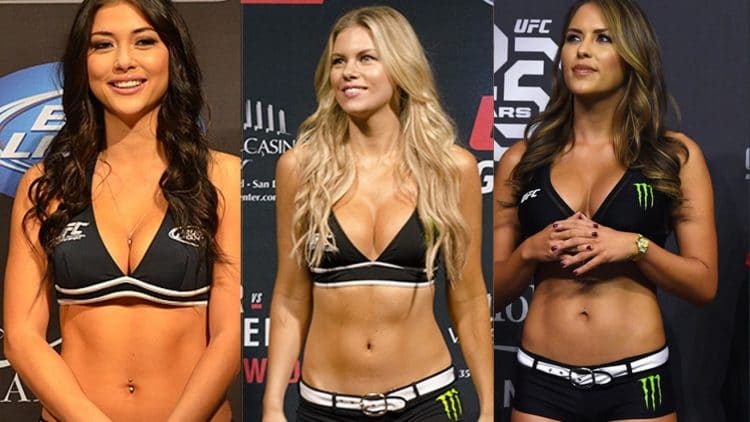 Let’s not kid ourselves..Top 10 MMA Ring Girls: March 2017 Edition.you’ve probably watched at least one or two UFC events just so you can drool all over the octagon girls. No shame in admitting it, we’ve all been there. They’re young, hot, fit and wear the bare minimum when it comes to clothing. So let us all take a moment out of our lives and read up on one of the best things MMA has to offer- the ring girls.

Angelica is a Russian born model who works as a ring girl for the Russian MMA promotion, M-1. You’ve probably seen her around the internet every so often as she is quite the stunner. As you may have noticed, she’s heavily tattooed which I’m guessing isn’t everyone’s thing but you can’t say she isn’t rocking it. She was supposed to make her MMA debut back in 2017 but no new information has come forth about her potential MMA debut. Here’s hoping 2019 turns out to be her year.

Arianny has been a member of UFC’s Octagon girls crew since 2006. She’s been on the cover of Playboy, Maxim, FHM, and tonnes more. At the age of 33 she’s seen it all and done it all and yet still continues to be a knockout.

MMA’s second biggest organization Bellator also holds some fit hotties that wear minimal clothing, introducing Mercedes Terrell. She’s 34 years old and as you may have noticed she works as a model and as a Bellator cage girl.

Chrisy was one of the best things to come to the UFC in 2011 when they bought Strikeforce. She was working for the now no longer existent promotion as a ring girl when then continued her glorious work in UFC later on. Much like most of the girls on this list, she’s been on the cover of dozens upon dozens of fitness/fashion/hot girl related magazines.

Brittney is the second half of the most famous Octagon girl tandem, with the other half being Arianny Celeste.  She first worked for the now defunct MMA promotion WEC, until it was absorbed by the UFC along with Miss Palmer. She is also a one time Playboy cover girl, Maxim cover girl and basically, every other hot girl related magazine. In her free time, she’s quite the painter.

I’m putting the Slavic beauties of Poland’s KSW as a whole here because there is very little information on one particular KSW ring girl. Also, they are all ridiculously good looking and just choosing one would be unfair for the rest of them.

Squat Vs Deadlift Comparison: Which One is King?