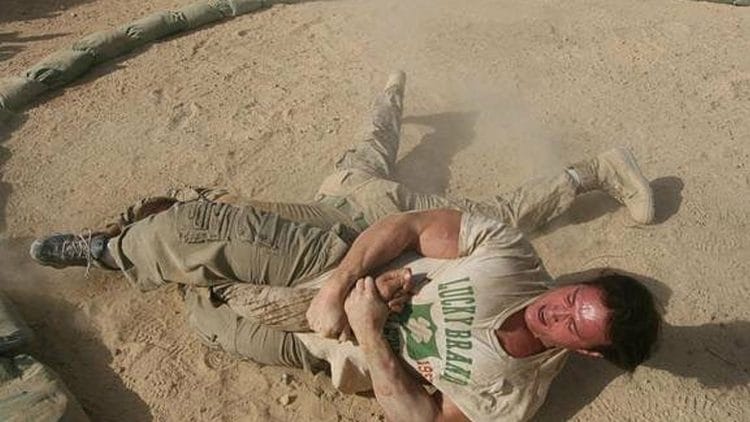 He is a real-life Gladiator!

Mike O’Hearn is one of the most iconic figures in the world of fitness. He was a Gladiator twice in his life, he’s acted in several films and has graced the cover of literally hundreds of fitness magazines. Well, O’Hearn was touring in Irag and Afghanistan before being invited to a marine base of which he gladly accepted.

Now, it could have been just a normal meet and greet with the Marines but it didn’t quite turn out this way. O’Hearn was pressured into doing many gladiator battles with the Marines and even a wrestling match called “Bull in the ring,” which resulted in him breaking someone’s arm.

“I was beaten up and tired from meeting and playing gladiator games with thousands of our military… When I arrived, I just wanted to take it easy… But they wanted to fight”.

O’Hearn explained how the Marines convinced him to play “Bull in the ring” and due to his background of being a Titan, most guys wanted nothing to do with him. However, there was one “big farm boy” who challenged O’Hearn to a match.

“To win, you either submit, choke out, or bodyslam the opponent outside of the ring. And most of them knew my background in Martial Arts so they didn’t want a piece of the Titan… But there’s always that 1 guy”.

Well, this guy turned out to be a collegiate wrestler but O’Hearn was called out by hundreds of Marines so he couldn’t back down now!

Before they knew it, a Marine had a broken arm and his response blew O’Hearn’s mind.

“He said “Sir, thank you for not holding back and giving me everything you had. I’m the one that called you out. This is the result of it and I’m okay with it. Thank you”.

“There I’m standing with my mouth open thinking…“Holy cow what a savage”.

Mike O’Hearn really admired this young Marine’s response and it reinforced his respect for the military personnel.

“See this is a metaphor for life:

There are people who get up every day and do their own metaphorical version of Bull in the Ring.⁣
⁣
The world gives them a fight and they’re pushing forward.⁣
⁣
If they get injured and it doesn’t work out for them, it doesn’t matter.⁣
⁣
That is how I live my life and that is how the people around me live their lives.⁣
⁣
Like Bull in the Ring, if the world calls me out, I’ll take it on and I’m giving everything I have”.

Mike O’Hearn learned an amazing valuable life lesson from a broken arm and it was totally worth it! ⁣