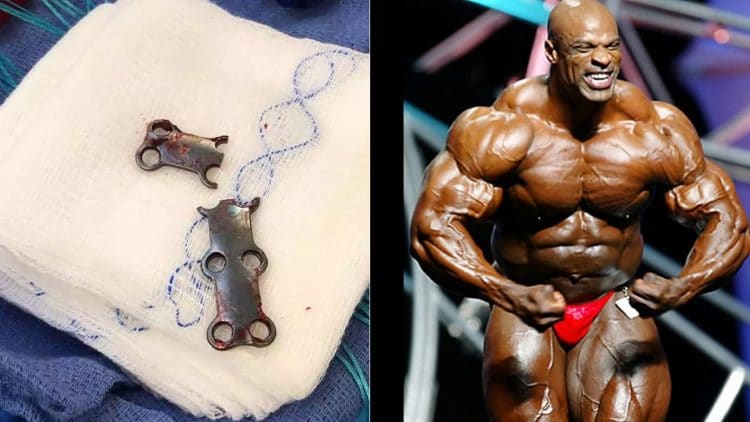 Ronnie Coleman stands tied for most Mr. Olympia titles (With Lee Haney), and many would envy his phenomenal career and life. However, the struggles he’s had to endure after his bodybuilding days would make anyone thankful for their legs (It was that bad).

Years of 800 lb squats and super heavy training took its toll on the king and in return, he required several surgeries (11 or 12 so far). But after a recent accident where Coleman fell, life could have taken a potential turn for the absolute worse (Thankfully it didn’t).

He injured his neck and had a herniated disc pressing against his spinal cord and this could have paralyzed him from the neck down.

In an interview with Muscular Development, Coleman was asked several questions but we’ll summarize the most important details about his recent surgery.

When Coleman was asked about his recent accident he described that he was grilling outside of his house and went inside to sit back down before his feet crossed and he ended on falling on his butt.

He explained that when he fell, he was alone and had to get himself back up to sit down, and there was a bad pain in his neck. After a few weeks, the pain was so severe that he got an MRI on his neck. Well, this is when the Doctors told him he needed surgery (Like tomorrow!) or he’d be paralyzed from the neck down if he fell again.

Although his Doctor could not promise a successful surgery; he went ahead with it and is now optimistic for a pain-free future and some relief finally, after a successful surgery recently. His back is healing up pretty and we hope he can finally function again like normal.

It’s looking good so far for the big man, and he’ll be at the Arnold Classic this year signing autographs and greeting fans which is great news!

Coleman concluded the interview with…

“I believe that things are always going to be OK in the end. You might be going through something right now, but tomorrow is always another day, and another chance to work things out and get better”.

We wish all the best health to the legend, Ronnie Coleman.

Fitness Influencer, Brittany Dawn, Is Being Called A “Scammer”

As an eight-time Mr. Olympia, Ronnie Coleman reached the top of the sport and maintained his status as the best...