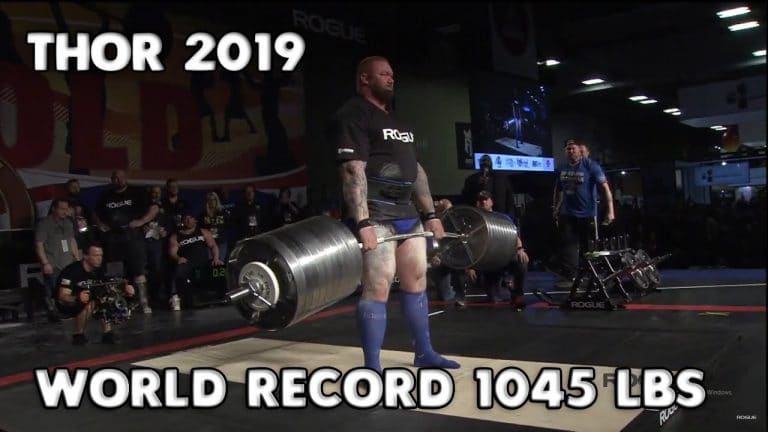 The first day of Arnold Strongman Classic is behind us and man oh man do we have stuff to talk about.  First up, some spoilers: no one broke Eddie Hall’s 500kg deadlift record. That’s the bad news(or good news if you’re Eddie), but the good news is The Mountain still reigns supreme.

The Rogue elephant bar was really ruthless this year. It took out J.F. Carron out of competing in the second day, injured Jerry Pritchett’s Brian Shaw‘s and probably Mateusz Kieliszkowski’s hamstring. It’s a bar that works against you. It’s wibbly wobbly, very long, pushes you forward and all in all, just a nightmare to work on. If that wasn’t enough the guys were working with INSANE weight. The top guys all pretty much had the opening weight of +400kg.

After most of the guys got either injured or reached their max weighting, it became clear it will all come down to the rivalry of modern-day titans-Shaw vs Thor. The Mountain was aiming at three things at that event. Crush his enemies, see them driven before him and hear the lamentation of their women. Well, kinda but not really….his goals were: 1. get first place at the deadlift 2. break his own personal record from last year 3. take out Eddie’s legendary 500kg deadlift record.  Shaw’s goals were pretty damn similar although he wasn’t eyeing that 500kg deadlift record all that much.

Shaw’s opening weight in the second round was 1021lbs and Shaw somehow got the weight off the floor and did a good lift. Up next was Pritchett, who tries his luck with 1030lbs to be the event leader but as soon as the bar leaves the floor it comes back crashing down as Jerry walks away with a limp holding his hamstrings-another one bites the dust.  Next up we got the champ, Thor Bjornsson setting up a personal best and an Elephant bar record with 1045lbs and it goes up with frightening ease. The Mountain is now the event leader and the competition leader.

At this moment the rest of the none-injured squad go for their personal bests to rack up points that will be crucial later on in the competition.  Next up, round three and Brian Shaw won’t go down without a fight and tries his luck with 1049lbs. He pulls and he pulls with all of his might but it wasn’t meant to be-it’s a no lift.

The Mountain reigns supreme over everyone else and now that’s he’s accomplished two out of three of his deadlift goals it was time to go for that all-time record. He gets hyped up by his Viking crew, gets promised entrance to Valhalla and goes to town. Unfortunately, it just wasn’t his day. The weight goes up to his knees and 501kg comes crashing down with Thor bleeding from his forehead…yes forehead.

Eddie Hall‘s 500kg still remains unchallenged, but not for long. Hafthor Bjornsson looked like he had the weight in him, just not on that day. This time next year, The Mountain will no doubt take another record.

Jillian Michaels’ Responds With Rebuttal Article After Criticism of CrossFit