WATCH: Dwayne “The Rock” Johnson From 1 To 44 Years Old

Dwayne “The Rock” Johnson Transformation Tribute. Hailing from the sunshine state, Miami, Florida, Dwayne Johnson became best known for his character “The Rock” in the WWF & WWE. Son of former wrestler Rocky Johnson, and grandson of professional wrestler Peter Fanene, (both in the WWF) Dwayne was soon to follow in his father’s and grandfather’s footsteps, when his career as a football player ended in injury while attending college. Joining NCAA, his wrestling genes came in handy and in 1990 became part of their National Championship team.

To attain the physique he’s spent the majority of his life working on, Johnson has to stick to a strict workout and diet plan religiously. Dwayne Johnson’s workout is always evolving as he constantly tweaks it and tries new things. Typically, though, he likes to hit big muscle groups once a week and smaller muscles (biceps, triceps, and calves) twice. He performs a drop set on the last set of nearly every exercise. Rest periods are short (30–60 seconds) to maintain his conditioning. The following is a typical shoulder workout.

In 2000 he expanded his acting talents by taking on the role of the villainous Scorpion King in The Mummy sequel, The Mummy Returns. While working on the film, inspiration struck the writers and a prequel, The Scorpion King, was penned for Johnson to star in. He also had success with a starring role in the action flick The Rundown (2003), which debuted at number one at the North American box office. He received kudos for his acting ability from a number of critics and has gone on to star in several family flicks that were box office hits…

WATCH: The Whiskey And The Deadlifts Workout 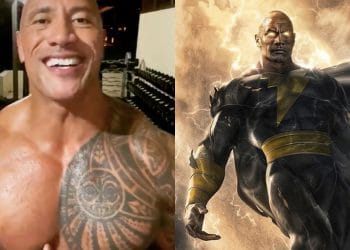