Background of the story.

Not too far back both Calum von Moger and Bradley Martyn were teaming up to create their own supplement company. The company ‘Origin Supplements’, was supposed to offer its buyers all natural products and give the masses the best possible quality supplementation. The announcement was met with lots of excitement and seals of approval from the social media fans. But recently after Bradly posted a video “The Fitness Industry Is F*cked” started the War Of Words between the two famous bodybuilders.

Bradley Martyn vaguely targeted Calum his supposed partner in the twitter post but he did not call out Calum by name: 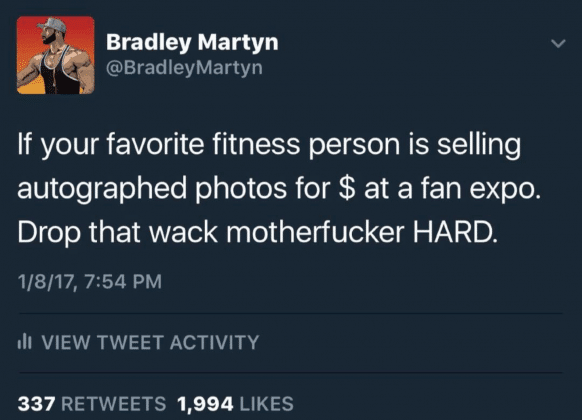 The Beef confirmation comes from Calum von Moger’s reply to a fan on Instagram detailing that he had some kind of falling out with Bradly.

“Brad agreed to show up to make this vid with me which was a smart move by him. There was more that I was pissed off with. But that was between me and brad. We decided to talk about the points that were already bought up to the public. The other issues we sorted out off camera and are things that he needs to work on himself. He apologized for those other things that I was still mad about and that’s all I needed from him. Sure, there’s more going on with brad but that has nothing to do with me personally, it’s up to him now to handle it the way he sees fit. Hopefully with #truth and #sincerity Time to move on. Better shit to worry about. I hope this answers any left over questions you might have.
Thanks for the love and support.
Catch ya later” – Calum von Moger

We are glad the two sorted this out face to face, man to man! (unlike Rich Piana and Mac Trucc)

Updates: There is still beef!

“And so bradly has deleted his fake apology video. The reason is because he has been asking me all morning to delete my comment on traintolookgoodnaked9 video. That sounds like he is trying to cover everything up and only cares about himself. What do you guys think I should have done? Should I make a video about everything else he tried to manipulate me with? Or should I just forget it and move on? There’s a lot of stuff I didn’t say in this video because Bradly didn’t want me to expose anymore then I had to… “

We couldn't resolve this the civil way. So who reckons we should resolve it the old fashion way? Gloves on, in the ring ding! ding! 🥊😁