Joe Rogan and journalist Mariana van Zeller detail how steroids have a big effect on bodybuilding, and how it is required to get certain results 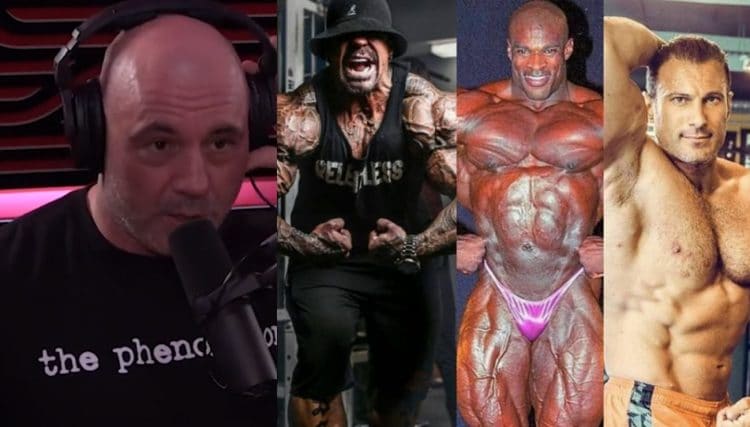 Joe Rogan may not have the most in-depth knowledge or firsthand experience of steroid use. However he knows that these athletes get a serious edge when using, and that is something he has seen for himself.

While Rogan has never been directly involved with strength sports, he is a fan of these athletic endeavors. His podcast has played host to many big names in strongman, and bodybuilding, as well as general diet and nutrition experts. So over the years, he has not only gained more of an appreciation for what these guys do, but also the rigorous regimens they must follow to be successful.

One aspect that Joe Rogan has become increasingly more knowledgeable about, is steroid use in bodybuilding and powerlifting. He and bodybuilding legend Ronnie Coleman discussed steroids in depth, and he explained on a recent podcast that he has some personal knowledge in the field. Speaking with Portuguese journalist Mariana van Zeller, he discussed his friend who was a natural bodybuilder but struggled against those who were not.

You should swear he was on steroids, he was big. He had big giant arms, like a very thick guy, but he was just really dedicated. He is nothing like those giants that you see at the gym, that are on steroids.”

Joe Rogan proceeds to talk about how there are some people that abuse steroids and are more massive than anyone could possibly be while natural. This was where Zeller chimed in, detailing a time that she witnessed firsthand the absurd effects that steroids can have. She told Joe that she was following a young, natural bodybuilder who was competing at a show, but that in between rounds of the contest, his coach Tony Huge opened his goodie bag and gave the bodybuilder some steroids. By the time the young athlete went back on stage, the difference was evident, as the athletes vascularity was immensely better.

After this, Rogan and Zeller discuss a woman that Joe watched a documentary on, who was a massive bodybuilder, before pulling up pictures of Tony Huge. They then bring up some other big names in bodybuilding who have been known for their massive size, the use steroids. One specific person they discuss is the late Rich Piana.

“There’s a guy who died recently who was famous for looking ridiculous, his name is Rich Piana,” Rogan said. “They don’t exactly know if steroids killed him, but its like if you see a body, and there’s a gun right next to the body, and the body has a bullet hole…”

From there, Joe Rogan looks at pictures of Tony Huge, and says that it is possible for him to have that type of physique naturally.

However it would require stellar genetics and hard work. After that, Joe brings up his time spent with Ronnie Coleman, singing high praises for the eight-time Mr. Olympia.

“Ronnie Coleman, if there’s a Mount Rushmore of bodybuilding, he’s on it 100%,” Rogan said. “It’s like Arnold, Franco Columbu, Lee Haney, Dorian Yates, but Ronnie Coleman is definitely on there. He’s a multiple time Mr. Olympia, an enormous guy with spectacular genetics.

“I believe he said he was 30 before he took steroids,” Rogan continued. “So he was a full time cop, and he was competing. Just like perfect genetics, he’s a stud. But then he realized he couldn’t beat these guys. Tired of getting his ass kicked…he’s a sweet guy too, an awesome guy. But he was honest about it, said ‘I was tired of getting my butt kicked,’ so he started taking it.”

Joe Rogan and Mariana van Zeller bring up good points about the difficulties of being success in bodybuilding without steroids. It may be controversial, but it is certainly an integrated part of the sport.