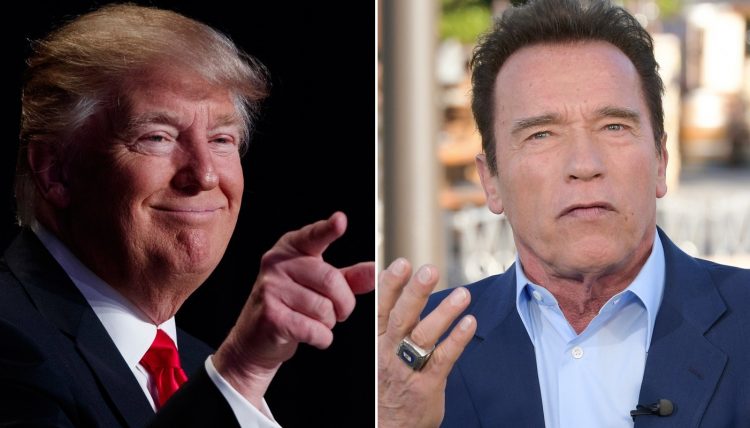 Arnold Schwarzenegger in a recent interview with “Extra,” spoke out against Donald Trump’s executive order that temporarily restricts citizens from seven Muslim-majority countries from entering the United States.

So at Thursday’s National Prayer Breakfast, president Trump used his address to bash his successor on “The Apprentice” and to ask the gathering to pray for Arnold Schwarzenegger because of the “ratings disaster.”

“We had tremendous success on ‘The Apprentice,’ and when I ran for president I had to leave the show. That’s when I knew for sure I was doing it, and they hired a big, big movie star Arnold Schwarzenegger to take my place, and we know how that turned out. The ratings went right down the tubes. It’s been a total disaster and Mark [Burnett] will never, never bet against Trump again.”

“The ratings went right down the tubes. It’s been a total disaster,” Trump said. “And I want to just pray for Arnold if we can, for those ratings.”

The audience responded with mild laughter.

“Hey Donald, I have a great idea. Why don’t we switch jobs? You take over TV because you’re such an expert in ratings and I take over your job and then people can finally sleep comfortably again, hmm?”

“To go and ban people who have a green card, that means that the United States of America has given you permission to work here permanently and you are on the way to permanent citizenship… I was in that position,” the former California governor said. “It’s crazy. It’s crazy, and makes us look stupid when the White House is ill-prepared to put this kind of executive order out there.”

Arnold took over for Trump this year as host of NBC’s “The New Celebrity Apprentice.”

Zack Ruhl With No Legs Can Bench 475 Pounds