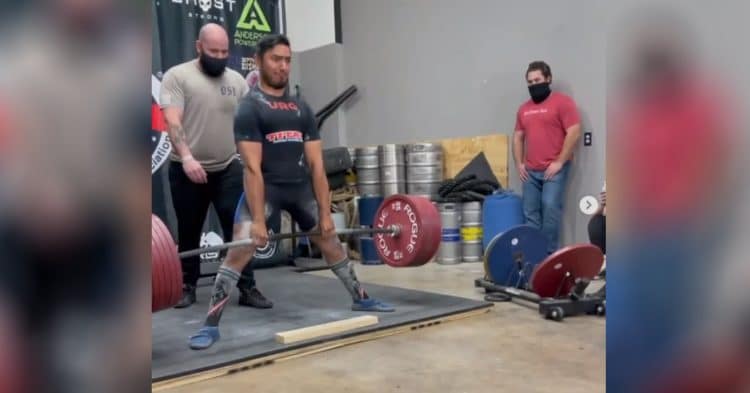 This weekend, Alex Maher competed at the United States Powerlifting Association competition in Amarillo, Texas, and set an all-time-world-record with a deadlift of 347.5kg/766.1lb. Maher competed in the 75kg/165lb weight class and made four attempts.

During the competition, each deadlift was heavier than the previous world record of 335kg/738.5lbs. Maher’s first attempt was not successful, but his second and third deadlifts got him into the all-time-world-record category.

Here are the numbers from his four attempts:

Competing With An Injury

Maher posted the competition results on his Instagram page, noting he had an injury while he set the record.
He also noted some performance tips that got him to the end of the game.

His fans couldn’t have been prouder. One said, “Awesome work, my brother…I’m proud of you.” Another said what they all were thinking, “This is what we are here for.”

Maher posted the images of the winners on his page, and you can see how his ankle is impacted during the lifts. Maher’s ankle injuries were sustained prior to the competition.

What is Next for Alex Maher?

With Alex Maher competing with multiple injuries and setting new ATWRs, his opponents will be worried.

Maher’s next competition will be at the USA Powerlifting Open in June 2021. He will lift in the same weight class and perform equipped deadlifts in a single-ply suit. His squat goal will be over 317.5kg/700lb.

Related: Build Strength and Size With The 15 Best Deadlift Variations

Alex Maher’s long-term goal however is to get a spot at the 2021 International Powerlifting Federation (IPF) World Championships in November.