Bodybuilding legend Dexter Jackson discusses how he knew it was time to finally retire from bodybuilding, and what differences he wish he could have made in his physique for his final Mr. Olympia 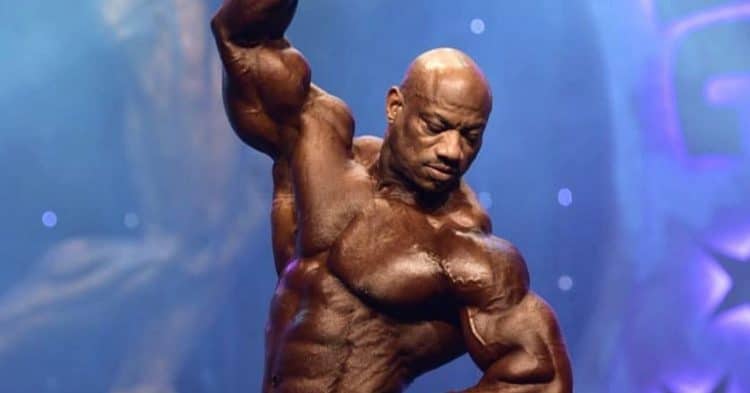 Legendary bodybuilder Dexter Jackson retired from bodybuilding after the 2020 Mr. Olympia, at the age of 51 years old. However he believes that he could have retired on top, if he had made some changes to his package.

With more IFBB Pro wins than anyone in history, and a Mr. Olympia title on his resume, there is no denying the amount of respect Jackson has in the sport. Not to mention the longevity it takes to compete at a high level into his fifties.

This all came to a close at the 2020 Mr. Olympia in December, when The Blade made his final walk across the stage. After ending the night in ninth place, he bid farewell to his fans in a heartwarming speech on stage.

Looking back on things, it was clear to Dexter Jackson, that the time to retire was now. Speaking in a recent interview, he explained that he knew it was the right time to call it quits before the show, after talking with his family.

“I knew it was it when I decided with my family,” he said.

“Me, myself, I like to plan ahead of time. So we sit down, we discussed everything, and once I put my mind to something it’s over.

“Not just my mind, when it comes to me retiring, but my heart too. My heart let me know when it was time to go. You know when it’s time to go, and I knew this show was going to be the last one.”

“Now when you want to talk about competing and friendships and all that stuff, yeah I’m going to miss all of that,” Jackson continued.

“That kind of hit me, like ‘I’m not going to be doing this anymore, hanging out with my boys no more, or getting to talk with the younger guys coming up and schooling them and teaching them things backstage on how to handle different situations. That will be missed.”

Even if there were doubts in the mind of Dexter Jackson about retiring, those would have been wiped away after he got on stage. Beginning his run at the Olympia in ninth place back in 2000, it was serendipitous that he ended in the same place at his final show.

However it was still a big shocking for Dexter to not be a part of the first callout at the 2020 Mr. Olympia. This was the first time it had happened in a while, and he knew that meant things were changing.

“What I thought was ‘Damn, I’ve never missed the first callout,'” Jackson laughed.

“I have, but it’s been a very long time, and it’s rare. All the way throughout my career, even in the amateur days. Not getting first callout, that’s very rare for me, so it hit me differently.”

However he says things were almost very different. Jackson came in second place at the 2020 Arnold Classic, even beating the man who went on to win the 2020 Mr. Olympia, Big Ramy.

Unfortunately with the global pandemic delaying the 2020 Olympia, Dexter’s prep got thrown out of sync a bit, which led to his decline in December. So he believes that if he looked the way he looked at the Arnold, he could have come way closer to winning the Olympia.

“If you go and compare the Arnold to the Olympia, there’s no comparison in my physique. If I came in with that Arnold physique, then I would’ve been fighting for the title. Waist was tighter, everything was much, much better,” Jackson said.

With that in mind, Dexter Jackson says that he still would have retired, even if he had won, so there is something to respect in that. While there is no denying that winning the Olympia at 51 years old would have boosted his resume, The Blade certainly does not need that to be considered a legend.