In His Last Heavy Squat Session Before The Showdown Meet, Andy Huang Hits A 815lb Squat 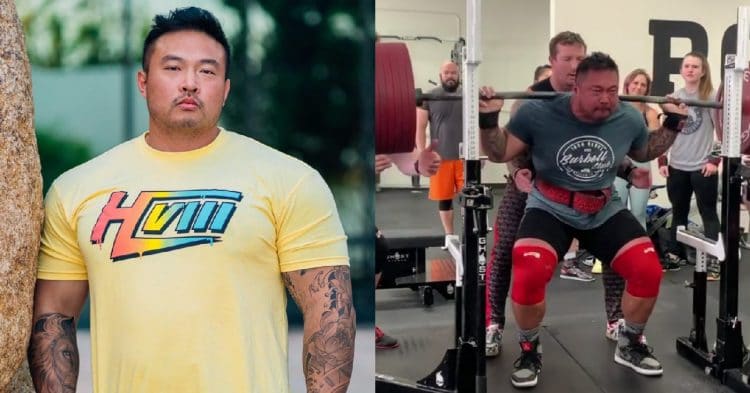 It has been over a year since the last time we saw Andy Huang in competition. As he prepares to make his comeback, he put up some pretty imposing numbers on the squat rack.

It has been a slow couple of years for the 35-year old Huang. Since 2018 he has only competed once, taking gold at the Kern USA Open. He has had a few setbacks preventing him from competing more, but that has not stopped him from being in the minds of powerlifting fans who have taken note of his skills. After all, he has been able to win every meet that he has competed in except one, so people have been itching to see him compete again.

It seems that Andy Huang will be getting back to action soon, at the Showdown meet in about a week and a half. Not only that, but he has been hard at work in the gym, trying to prepare for his first contest in almost a year and a half. This was evident recently, when he took to his Instagram to share a video of himself crushing a squat session, taking 815lb for a ride.

“370kg/815lbs for my last heavy squat this prep. Well under my best, but I haven’t touched over 800lbs in sleeves in 2 years. After tearing my adductor last year, then straining the other one earlier this year, it’s nice to finally be back healthy and almost where I used to be! #comebackseason
–
Thanks to @bilbo_swaggins181 for the back slaps and my spotters and the whole @socal_powerlifting crew for the hype! Also shown is last warm up 350/771lbs.”

This is not the best squat we have ever seen from Huang. However given the difficulties he has had with injuries over the last several months, and the fact that he says this is first time pushing past 800lb since then, this was a really good showing. Not to mention, it is was fun to see John Haack in the background, spotting him and hyping him up.

Andy has been putting everything together as his prep for the Showdown comes to a close. In addition to this final heavy squat session, he also shared his final heavy bench session. This saw him hitting a 534lb press with ease, earning a PR along the way.

Coming back from injury always has its challenges, but Andy Huang seems ready to face them head on. It will be great to see him back on the platform after his time away, and to see how he does.