Flex Lewis Shares His Killer Arm Workout As He Begins Preparing For The 2020 Mr. Olympia 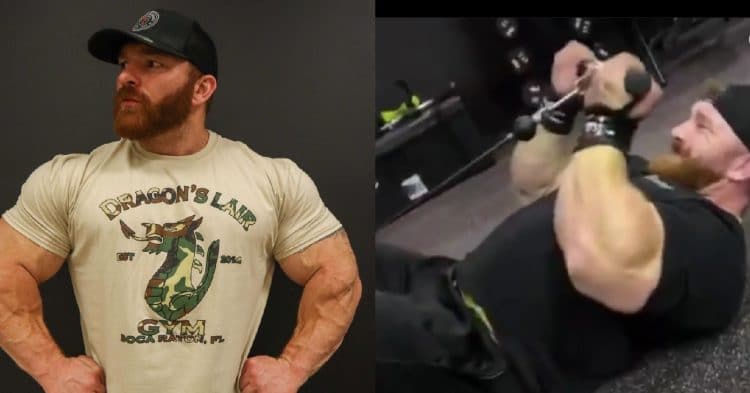 As he prepares for the transition from 212 to Open, Flex Lewis has been hard at work to bulk up his physique. He shared a glimpse of that training recently, crushing an insane arm session.

In the midst of the insanely stacked lineup, and riveting storylines headed into the 2020 Mr. Olympia, an easily forgotten aspect is that Flex Lewis is moving to the Open Division. Having reigned over the 212 Division for years, the difficulties of keeping his weight low, in spite of his body growing, made things challenging for the former champion. Therefore he has been putting in the time on the weights, so that he can let his growing frame flourish, and hopefully make a big impact on the stage in December. In fact, one could argue that the fact that the Olympia was delayed by a few months was a blessing for him, as it has allowed him even more time to acclimate his body to the increase in mass.

With the 2020 Mr. Olympia just over three months away, Lewis has really begun to dial in his training. It seems like every session is more intense than the last, and his recent posts to Instagram have proven that. He recently shared several clips of his arm training to his Instagram Stories, and it is clear that he is dedicated and focused on the task at hand.

There are a lot of intense things that Lewis can be seen doing in these clips. The first clips see him knocking out some cable pulldowns, being sure to focus of his technique in order to get the best activation from his arms. The next few videos are of him doing lying cable curls, and even though the weight is not seen, he really looks to be pushing himself. Lastly he tops things off with dumbbell curls, capping off an intense training session.

It is clear in this update, as well as others, that Flex Lewis has put on some serious muscle since his 212 days. It makes his upcoming Olympia appearance all the more exciting. It will be fun to see him on stage alongside the likes of Phil Heath and Brandon Curry, and see how he looks in comparison to these beasts.

Flex Lewis has been keeping his physique updates close to the vest as the Olympia draws closer. However the anticipation to see him unveil his new package on stage this December.