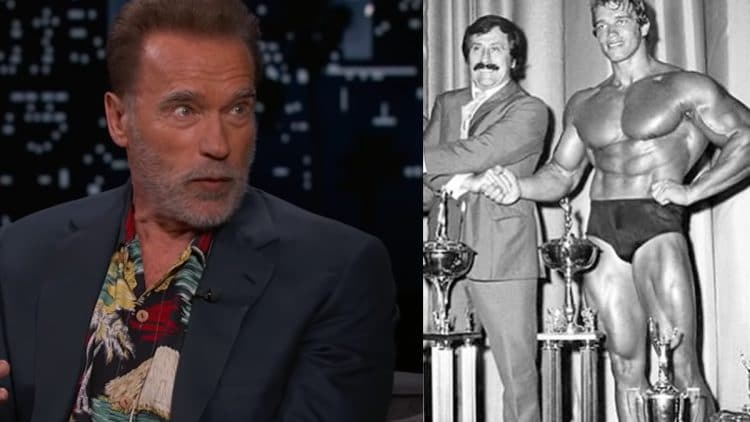 Schwarzenegger is a multi-talented man. Having conquered the sport of bodybuilding, the Austria-based athlete left for Hollywood and began to dominate in his new profession too. In yet another display of career versatility, Schwarzenegger ran for Governor of California and won his race respectively. Following a stint as a government official, he’s since moved on and despite a successful entertainment career, Schwarzenegger still appreciates the glory of bodybuilding.

In addition to being a bodybuilder, actor, and politician, Schwarzenegger has also been lauded for his philanthropic efforts. Just a few months ago, the bodybuilding legend helped donate several small homes to California military veterans.

Speaking with Kimmel on the Jimmy Kimmel Live! show, Schwarzenegger admits that he dreamed of being a bodybuilder as a child.

“Oh, it felt fantastic. It’s like, you know it’s something that you always dreamt of as a little kid, up on stage, or you’d end up being at this stage here and getting a standing ovation. It’s fantastic but anyways it’s great to be back here because the last time I did the interview it was online, it was a Zoom meeting kind of thing.” Arnold Schwarzenegger said.

Given his success in the sport of bodybuilding, it’s safe to say that Arnold has long achieved his dreams. Schwarzenegger won six Mr. Olympia titles from 1970 to 1975. His impact on the sport reverberates to this day.  Every year, the Arnold Sports Festival brings together the strongest men in the world and the best bodybuilders to compete on stage.

Schwarzenegger Discusses Smoking Marijuana by Accident with Danny Devito in 1994

In 1994, actor Danny Devito and Arnold worked together in a film entitled, Junior. As part of a fertility research project, the movie posits Arnold as a male scientist who agrees to carry a pregnancy. Danny Devito plays a doctor in the movie.

During the story told by Schwarzenegger, the pair of actors take a break and eat Italian food inside of Devito’s on-set trailer. Devito offered some high-quality Montecristo cigars to Arnold. However, the bodybuilding great accepted the gift without realizing that Devito packed the end of the cigars with marijuana.

“Yeah, we are very, very good friends. Absolutely, absolutely he’s a great guy. So, we all do these little things that you always do in a movie. There was one time when I was shooting Junior. I remember and it was lunch break and Danny said to me “come to my trailer I’ll cook some good Italian good’. I said ‘okay’. So, I went to the trailer, and we ate the Italian food. It was delicious, the pasta and all the stuff he had, then he made coffee, some espresso.

Then after, he says “Arnold, you always give me cigars and I always feel guilty. I have cigars this time and I want to give you a cigar. I said fine ‘Danny that sounds great.’ He brings out a long one, a beautiful Montecristo. Then I put it in my mouth and light it up, he comes to me with the lighter. Arnold said. We light it up and we smoke it, and it was fantastic. We get to the set and we continue on with the scene, and I forgot my lines.

Once Arnold began filming again, he realized that he couldn’t remember what to say. Over an hour later, Schwarzenegger couldn’t remember a thing and had to speak with the script supervisor to recall his lines. Unfortunately, Ivan Reitman recently passed away. The director was responsible for the hit film Kindergarten Cop as well as directing Juno and the aforementioned Junior.

“I’m sitting in front of the camera it was a close up of me, Danny is just behind the camera. The director says action, Ivan Reitman, and I say, “What am i supposed to say?” Well, we continue on with the scene, Arnold, from before lunch, remember the scene when you and Danny were talking about going out and you’re now pregnant and all of these kinds of things?’ And so I said, ‘No, I don’t remember,’ I said ‘What did we do before lunch?’ And so I had to go to the script supervisor, I had to check out the script, I totally forgot everything. Find out then an hour and a half later when I finally started remembering things again that Danny put some marijuana in the front of the cigar.” Arnold concluded.

Even in his later years, Arnold Schwarzenegger’s dedication to hard work is inspiring. Schwarzenegger appreciates the glory that came along with his incredible bodybuilding career. While he may not be flexing his physique on the big stage, Arnold’s knack for entertaining an audience continues to be one of his greatest strengths.