The 15-episode series will give viewers an inside perspective on the sacrifices made by Strongmen and bodybuilders. 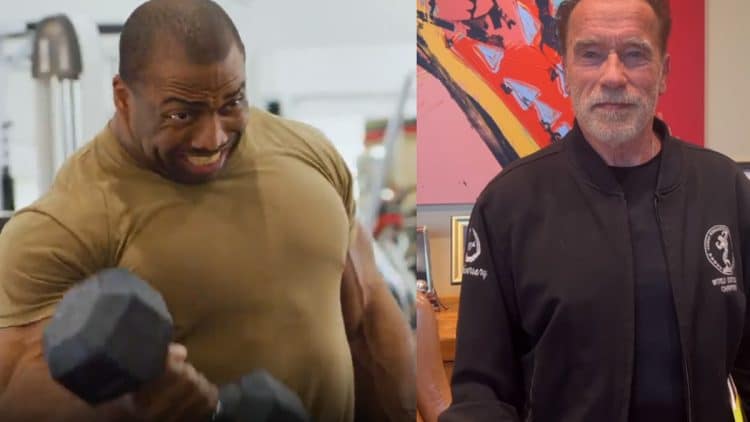 With the 2022 Arnold Sports Festival arriving March 3-6, Arnold Schwarzenegger has introduced a mini-series that will highlight and pay respect to athletes participating in this year’s event. On Thursday (Feb. 11, 2022), Arnold released a teaser of the series on his Instagram page.

Schwarzenegger has yet to reveal when the series of episodes will drop, nor does he make it clear where fans will be able to watch. However, there is currently a teaser of episode one on Fanmio’s YouTube channel which will also be airing a pay-per-view of the Arnold Sports Festival next month.

The first episode featured a nearly 2-minute video and shows Cedric McMillan getting prepared for competition. McMillan secured sixth place at his last Arnold appearance in 2020. Following the contest, McMillan suffered injuries that forced him to withdraw from the 2021 Arnold Classic. In particular, a nagging hand injury kept him from taking the stage, but it looks like he’s addressed his recovery and will return in just under three weeks.

Cedric McMillan won the 2017 Arnold Classic title. With a comeback at the forefront of his mind, fans are highly anticipating McMillan’s return to the second biggest bodybuilding show of the year. Introducing “Rise of the Champion”, Schwarzenegger will highlight Strongmen and bodybuilders in the leadup to his esteemed competition.

Below you can watch the full clip posted to Schwarzenegger’s Instagram page.

“We’re excited to announce our 15 episode series, Rise of a Champion, featuring top bodybuilding and strongman contenders from the Arnold Classic and Arnold Strongman Classic competitions. Each episode gives a look inside the mindset of these athletes and their dedication, focus, and ambition on the road to becoming a champion of their sport.

Episode 1 features Cedric McMillan, the 2017 Arnold Classic Champion who will be making his return to Columbus this March in search of his second title.

Get the PPV NOW at http://Fanmio.” Arnold shared.

The Arnold Classic is invitation only. However, there have already been three Men’s Open competitors who were forced to withdraw from the marquee contest. Late last month, Arnold Sports representatives informed staff at Fitness Volt that Rafael Brandão was withdrawing from the event due to undisclosed reasons. Then, the list of competitors was reduced again last week.

Nathan De Asha removed himself from the 2022 Arnold Classic lineup after revealing a bicep tear inhibited his ability to prepare adequately. Hours after Nathan pulled out, Mohamed Shaaban joined the bodybuilder after announcing that he’s suffering from bulging discs and will be unable to compete in just a few weeks. Shaaban provided MRI results, a doctor’s note, and a video of his orthopedic doctor explaining his condition.

2021 Arnold Classic winner Nick Walker has opted not to compete at this year’s show. The rising bodybuilder decided to forego the Arnold this year to work on improving his placement for Mr. Olympia. “The Mutant” turned in a fifth-place appearance in his first Olympia in 2021 and will take extra time in building his physique for the 2022 show in roughly ten months.

With bodybuilding and Strongman competitions abound, it will be interesting to see which athletes are selected and featured in Schwarzenegger’s new video series, “Rise of a Champion”. Either way, it’s good to see an athlete like Cedric celebrated considering how long and how hard he’s been competing year after year.

Taking a closer look at what motivates these competitors is a great way to get fans excited for the Arnold Sports Festival. Arnold Schwarzenegger’s “Rise of a Champion” series underlines the values and mentality needed to dominate sports like bodybuilding and Strongman.