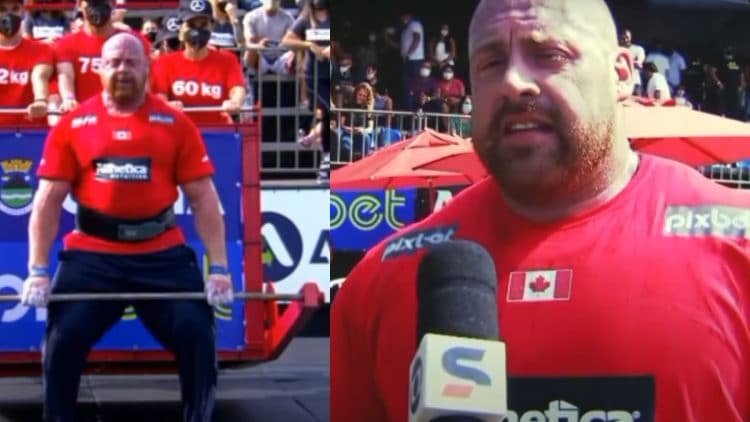 JF Caron took part and won the first competition of this season, which is the 2022 Força Bruta. The competition was held on February 13th, 2022, in Cotia, Brazil. Caron dominated the field and won all three events. There were only four athletes in the competition, but they are some of the greatest in the world. Despite being a heavy favorite to win, it was not clear whether Caron will go all out, as he will compete at the Arnold Strongman Classic in less than a month from now. It is not a surprise to see him win, as he is 9x Canada’s Strongest Man and a Hummer Tire Deadlift World Record holder, which he set at the 2020 Shaw Classic.

This is the first time that JF Caron has claimed a title in this competition, and the previous winner was Mikhail Shivlyakov. Heinla and Kearney had the same points at the end of the competition. However, Heinla placed better in the truck pull which counted as a tiebreaker, and he claimed second place.

The aim of the workout was to pull as many reps as possible, but it was not a standard deadlift. Contestants had to lift a modified platform filled with people. Caron is a static powerhouse and came first with six deadlift repetitions. However, he was against Heinla and Kearney, who are known for their deadlift prowess, which makes the win more impressive.

They used ten kegs in the keg toss, and each competitor had 90 seconds to toss them over a five-meter bar as quickly as possible. The weight ranged from 17 kg to 26 kg. In addition, the kegs were weirdly shaped, which made it harder.

JF Caron went last and only needed to toss 6 kegs over to win. However, he decided to put on a show, and was the only one to do all 10 kegs.

In the last event of the competition, athletes had to pull a 12,000 kg truck. The first two to attempt it were Rob Kearney and Dmitrii Skosyrskii, but they struggled a lot, which showed how heavy the event was. However, JF Caron is in great shape, and he pulled the truck all the way to the finish line. Heinla did it too, but in a much slower time than Caron.

You can watch the full competition here:

Although JF Caron won and took some money home, this competition was just to get warmed up for the 2022 Arnold Strongman Classic, as it is one of the most prestigious strongman competitions. Caron proved that he is in great shape, and could definitely put up a brilliant performance at the 2022 ASC.