Arnold Schwarzenegger Demolishes Strict Curls With About 120lb For Reps 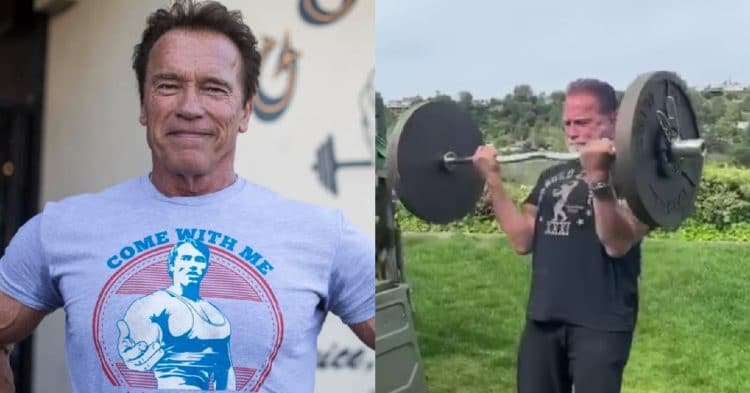 It is no secret that Arnold Schwarzenegger is way stronger than the average 73-year old. He showed this again recently in a big way, with some pretty solid work in a recent session.

As one of the greatest and most beloved figures in bodybuilding history, Arnold has always proved to be a source of inspiration and awe. Even at his advanced age, and even through injuries and health problems, he has never stopped training. Even when things were shut down and gyms were closed, which is something the former California Governor was in major support of, he could still be seen riding his bike with a face mask on, or training in his home gym alongside his donkey.

Most recently we got to see Arnold Schwarzenegger getting to work outdoors, and doing some things that will make the jaw drop. A post to his friend, Ralf Moeller’s Instagram saw the iconic bodybuilder pull up to a hillside in his trademark military truck. Then he pulls an already loaded bar out of his truck bed, and does a few bent over rows. Next he starts really turning things up by doing several strict curls, keeping some great form with some decently heavy weight.

Judging by the plates, this looks to be about 115-120lb that Arnold is curling with precision. This is based off the 45lb plates on each side, as well as the 2.5lb plates added to that, plus the weight of the bar. For someone who is well into the senior years, this is undeniably impressive.

Lately, Schwarzenegger has been amping up his training big time. Just recently we discussed him doing some T-Bar Rows in his home gym, and he looked absolutely incredible there as well. It just goes to show that he is still in better shape than most other people who go to the gym on a regular basis.

There are a lot of things about Arnold Schwarzenegger that are equal parts inspiring and insane to see. However his ability to seemingly constantly defy the aging process is by far one of his best attributes. It has been decades since he last competed as a bodybuilder, but he is still actively working out at every chance he gets. While most people his age are in nursing homes, he is pumping iron in the sun and reminding us all why he is the greatest to ever do it.