Arnold Schwarzenegger Shares Heartfelt Tribute For The Late Dave Draper: “He Was One of My Idols” 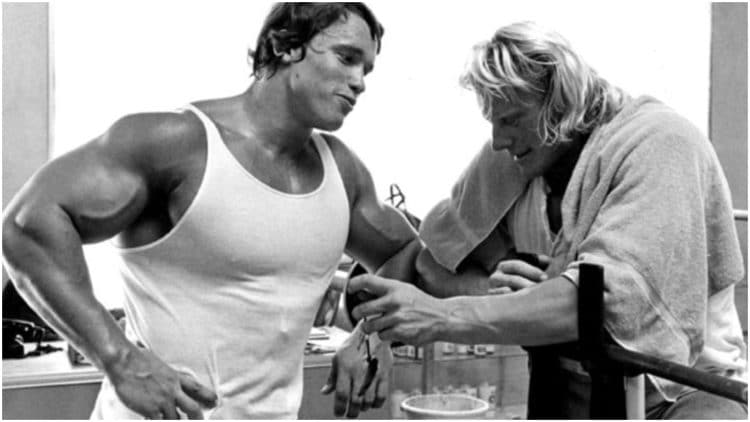 On Tuesday November 30, 2021, Dave Draper died peacefully in his sleep after his wife posted a Facebook statement to confirm the saddening news. After hearing of Dave Draper’s passing, lifelong friend and training partner Arnold Schwarzenegger issued a heartfelt tribute for the bodybuilding legend.

Following the unfortunate passing of Dave Draper, the 7x Mr. Olympia winner Schwarzenegger drew great inspiration from Draper’s gumption and career goals. The pair of young bodybuilders traveled the world together and developed a close bond.

Dave Draper was an inspiration to millions of people all over the world, including me. He was one of my idols. In Austria, I kept his cover of Muscle Builder magazine on the wall above my bed for motivation, and when I saw him starring in “Don’t Make Waves”, I thought, “My dreams are possible.” When I got to America and finally met Dave, I learned his heart was as big as his pecs. He even hand-built my first furniture when I moved to Santa Monica, and let me tell you, he was talented.

Can you imagine meeting your idol and becoming his training partner and traveling all over the world together? I was in heaven. He couldn’t have been more welcoming, and he was a fantastic training partner who always pushed everyone around him in the gym to be better. He was an amazing writer and a great family man. I will miss the Blond Bomber, but his memory will always be with me. My thoughts are with Laree and the whole family.

Dave Draper and Arnold Schwarzenegger trained at Gold’s Gym in California. The multi-talented bodybuilder found many niches that suited him well. “The Blond Bomber” took to acting, fitness blogs, and various forms of writing. Though, it was the Hollywood adventure that piqued the interest of Arnold Schwarzenegger.

After witnessing Draper’s role in “Don’t Make Waves”, Schwarzenegger would eventually become a Hollywood sensation having starred in the hit action franchise film series “The Terminator”.

Like a duck to water, Dave Draper took to another venture in writing when he began to get a little older. The legend amassed a number of columns and even published a couple of books. With such a commanding influence on one of the greatest bodybuilders to ever live, surely Dave Draper had a formative impact on the many avenues of success that Schwarzenegger realized.

Schwarzenegger and Draper developed a close relationship through the 1970s-1980s. As Arnold Schwarzenegger would make his foray into motion pictures, his dreams would have been much harder to attain without the influence of Dave Draper. Draper was a positive bodybuilder with an endless ambition to keep improving at various crafts.

Even in his later years of life, Dave Draper continued his passion for lifting weights. Schwarzenegger’s positive thoughts are with Laree and the Draper family. The staff at Fitness Volt all send our deepest condolences to the Draper family in this time of bereavement.